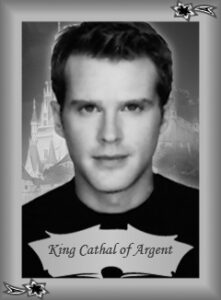 King Cathal is something of an unknown quantity, and is almost as much of a mystery as the land he rules. It is known that he is the son of King Robert and Queen Claire, named for General Sir John Cathal Graham (aka Lord John Graham of Oakwood), an old friend of the King. He grew up with his sister on the King’s Isle. However, in striking contrast to the self-assured Alison, he desperately shy as a child and rather clumsy and uncoordinated, which sometimes led to tension with his sister. Whereas she thoroughly enjoyed engaging in the outdoor pursuits like riding and sailing, he would always prefer to keep very much to himself, studying and reading. Moreover, from about the age of nine or ten, he often disappeared in the evenings and kept his own counsel as to where he’d been, which led to interesting speculation about what he was actually doing and where he was going.

Like his sister, he attended Sable Mage College, where he specialised in transportation, communication and healing magics, especially mental magics. He was a brilliant student, performing significantly better than his sister, and he graduated with his Masters at the comparatively young age of twenty-three. What is possibly more significant, is that during his time at SMC he finally came out of his shell, and shed the clumsiness of his youth. He proved himself to be an intelligent and quick witted young man, with a keen sense of humour, a quiet confidence and a gentle but firm manner. On graduation, he spent a while touring the Commonwealth, and working with some of the Sable forces out there. He was involved in one or two minor military actions, and in those he developed previously unsuspected talents as a swordsman, and also a general and leader of men.

What is not known for certain is how he developed the affinity for the Outer Shadows which ultimately led to him becoming King of Argent, although looking back, it has generally become assumed that many of the evenings when he couldn’t be found in Sable as a child, he was probably in Argent. Nowadays, it is widely rumoured that with the possible exception of King Robert, he is the only person who can survive passing the day in the Sky Realm, which normally only manifests at night, and certainly, he doesn’t return to Sable when the sun comes up.

Before taking the throne, Cathal studied with Duke Raibeart d’Argentis, who was Lord Regent of Argent in the earliest days of its existence, and was a quick pupil, which gave him an excellent grounding for life within Argent, as compared to Sable. He maintains a good relationship with Raibeart, who he considers both friend and mentor, and who almost treats him like the son he lost.
On his twenty-fifth birthday, King Robert granted him the Realm of Argent, two years before his sister became Queen of Azure. Little is known of his coronation, save that the crown was placed on his head by Duke Raibeart. However, the occasional travellers to and from the Outer Lands acknowledge him as their King and hold him in high esteem. About thirty years after his accession to the throne of Argent he married Finnouala, an Argentian noblewoman.

Cathal is sometimes seen in Sable, and has a warm relationship with King Robert, but he spends the majority of time in his own realm. When he is around Sable, it’s obvious that he’s not the most garrulous member of the Royal Family, although he is far from unfriendly, and when he does talk to people, he has an easy, confident manner. He has also occasionally served with Sable’s forces, as has his son Vladimir, although in recent years, the latter has become Commander of the Argent Army.

His appearance is far closer to his father than to either his mother or Alison. He stands about 6’2″ and is quite slim, with his father’s green eyes, although his face is a little longer and thinner. He is more lightly built than King Robert, although he is quick and wiry and reportedly something of an expert with a blade.

The Queen of Argent is but an occasional visitor to Sable itself, rarely appearing in public in the lower realm except on special occasions. She is the daughter of Duke Nicholas Naoimhean, an Argentian nobleman who has been a staunch supporter of Cathal since his accession to the throne and is a member of the King’s Privy Council; and Arienne, daughter of Duke Raibeart d’Argentis. Her appearance is typically Argentian: she is tall and slim, only a couple of inches shorter than her husband, with a pale complexion, and long, curly hair, and her eyes are pale grey, although with an unusually darker colour to the edges.

She is known to be a very competent sorceress, as well as having the suite of abilities known as ‘Night Magic’. She is also an artist, delighting in painting geometric and natural designs with decidedly Celtic roots. She is charming, witty, loved by the people, and appears to be devoted to her husband and their family.

The King and Queen have three children: their son, Vladimir, was born about ten years after they married, and they also have have twin daughters, Sìne and Caitrín, who were born about fifteen years after their brother. They have recently announced Caitrín’s betrothal to Geraint Pryderi, son and heir of Duke Aodhán.

Eldest child of Cathal and Finnouala. He is of a military mindset, and is an important commander in the Argent forces. He is a frequent visitor to Sable, where he regularly co-ordinates with Prince William and Prince Francis on the conduct of the war with the Reich. He has the pale blond hair of his mother, although his complexion is somewhat darker than hers, and he has inherited his father’s green eyes. He is rumoured to be Talented, but it is not known if he has been to mage school.

Very little is known of Cathal’s daughters, as they rarely visit Sable City itself – although they are believed to be occasional visitors to the King’s Isle. They have the pale colouring of their mother, and are both believed to be powerful mages.

Raibeart is the senior nobleman of the Twelve Houses, by virtue of his earlier role as Regent of Argent. He stands around 6’6″, and has a presence to him which inclines those who meet with him to obey his wishes and follow his orders. As an arcane practitioner, he is second only to King Cathal within Argent. If, indeed, he is second at all. He can be infinitely patient when he chooses to be, but he does not suffer fools gladly, and is quick to anger if circumstances require it. Moreover, he is a bad enemy to those who cross him, while on the other hand being an utterly trustworthy ally and loyal friend to those who chooses to give his friendship to.

That he was willing to relinquish the throne when Cathal first came to claim it as a surprise to many, but he accepted the new King, signifying his acceptance by being the one to place the Crown on the new King’s head, and by doing so, guaranteed that any potential opposition from the Twelve Houses was overcome almost before it began. It is also believed that he and Cathal negotiated the agreement with House Belenus which led to them withdrawing from Argent, to return the number of noble houses to the Ruling House plus the Twelve.

Raibeart is married to éabha of House Ríoghnach, with whom he originally had twins, a son named Cáel and a daughter called Arienne. However, Cáel faded in childhood, leaving Arienne as their only child. She is now the wife of Duke Nicholas Naoimhean, and is the mother of Finnouala, Cathal’s Queen, binding House d’Argentis and House de Lacy together by tie of blood.

What will happen to House d’Argentis should Raibeart fade or pass to the Isle of Dreams is a matter of interesting speculation, given that at this time, there is no heir of his body who could take on the mantle of Head of House. It is likely that the King would be the one to decide whether éabha would become Head of House, such that should she remarry, the children of a new marriage would become House d’Argentis; whether one of his own children, being descended from the House through their mother, should re-form it; or whether a new Twelfth House would be raised in its stead.

Following recent attempts to provoke a war between Argent and Sable, there has been a change among the ruling Houses. House Emer and all its members have been attaindered and stripped of their estates, with the eldest son, Cainnach, executed for treason.

Their place among the Twelve Houses has been given to Duke Seisyll and House Brennan.

Owain Emer is a former Argent nobleman, who fundamentally disagreed with King Cathal, believing that Duke Raibeart should have surrendered rulership of their country to an outworlder, so he decided to carve out his own little empire somewhere else. To this ends, he explored out into the Sky Shadows, looking for soft spots between the two realms, as a method of extending his influence beyond the Air Realm.

He was aware of the incident with Eabha Aranrhod, and realised that it caused problems between Sable and Argent. This opened up possibilities of striking closer to home to cause causing Cathal problems, in the hope that relations would deteriorate between the Realms, such that Cathal would have to leave. His plans were foiled by a group of Sable agents, but he managed to escape in the form of a great silver dragon. This was chased back up into Argent, and towards the Isle of Dreams, before disappearing.

Given that the incident also showed indications that the rest of his family was involved as well, King Cathal attaindered the Emer family shortly thereafter.

While Owain’s studies have largely been into the Air Shadows and the Air/Earth breach worlds, Aisling has been looking closer to home. As such, she has discovered the fundamental nature of the Sable Mountains, and has enough control to manifest beings from those mountains. She seems to have a knack of controlling creatures both within the Sky Shadows, and from the Sable Mountains.

Owain and Aisling had two children: a son named Cainneach and a daughter called Étaín.