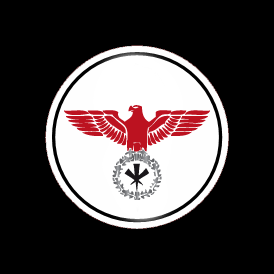 Since the Armistice between Sable and the Reich was finalised in June SY125, signs were have been discovered that there might be another extreme right-wing, anti-shapeshifter enemy presence relatively close to Sable. These include a number of attacks on Sable territory and within the Kingdom itself that bore the hallmarks of such beliefs, but were proven to be unlikely to be connected directly to the Greater Reich. This led the SIS to conclude that there might be some kind of “Shadow Reich” out there, which held much more firmly to the hardline beliefs held by the Reich in earlier times, rather than the (at least somewhat) less rigid ones that have become more apparent since the first loosening of attitudes towards shapeshifters were brought into force.

The first hard evidence of the existence of the Weimar Republik was discovered in May 152, when a small force staged an incursion on the world of Canchester, capturing an experienced Sable agent in an attempt to use him as an arcane link to attack Sable. The agent was freed, and at that time, Sable forces were unable to take any prisoners. They were, however, able to identify certain characteristics of the magics involved, which indicated a development of certain ritual practices used within the Reich, as well as elements encountered within New Oceania. Subsequent investigations, including discussions with the ReichsMagieren, ascertained that the perpetrators were former Reich operatives who had been declared dead or missing many years before. Further attacks on both Sable and the Reich were recorded in the years that followed, causing both realms to double-down on their efforts to identify the origin of the perpetrators.

The Weimar Republik, and associated Weimar Bloc were discovered by Sable agents in September SY155. Preliminary investigations ascertained that the Weimar Republik had taken control of eight worlds, and had a significant presence on another fourteen. At the core of the Bloc was Weimar itself, and the six Shadows adjacent to it. At discovery, Weimar was protected by an impenetrable arcane/technological hybrid barrier, with elements reminiscent of the both the power located on New Oceania, in Veil 100 North, and the Technocracy. Secondary barriers had been erected around the six adjacent worlds.

A full-scale intelligence gathering operation by the Sable SIS was instituted, and by December SY156, Sable and the Technocracy had established a military presence in the area. From the Sable side, the military effort was spearheaded by Field Marshal Prince James, while from the Technocracy it was led by General Tyla Moloney.

The information presented here was gleaned by Sable/Technocracy agents over the period between September SY155 and 31 January SY158. The situation post 1 February SY 158 is less clear.

The Reich also sent a military presence into the area, but it wisely stayed away from the Sable/Technocracy forces.

The Weimar Republik was set up in Veil 22 by Ernst Keller as Führer  and Sofia Halbeck as RFSS, two previously unacknowledged scions of the Sable/Reich ruling lines, some time around SY121-22. They were assisted by Helmut Eckart and Alfred Weber as “arcane consultants”, as well as two later arrivals from New Oceania: Raymond Syke and a representative of the remains of the Brotherhood of the Martyr, named Carlos de Real.

To solidify the Republik further, in SY125, Keller, Halbeck, Eckart and Weber, helped by Syke and de Real, devised a way to build a central Power, using ritual magic, family Blood, and the Channelling ability associated with New Oceania, which they believed would not be detected by King Robert or RFSS Delatz. In the event, they were proven correct, and they inscribed the Muster at the heart of the Weimar Republik: a serviceable, relatively complete Power that was not locked to a particular Bloodline.

Once the Muster was created, Weimar started to expand, moving onto the Shadows around it, and formed a Reich-style nexus out in Shadow (see External Landholdings ). In  subsequent years, Weimar remained an isolationist nation, working for self-sufficiency through the conquest of itssurrounding Shadows. At the time of its discovery by Sable forces, it was obvious that it considred both the Kingdom and the Reich to be enemies of Weimar.

By the end of January 158, Keller and Weber were based mainly on Weimar itself, while Halbeck, Eckart and the Waffen-SS under Lena Steiner were active in the Shadows around it. The two worlds adjacent to Weimar itself that were previously in the Quarantine Zone, Lichtenau and Todtnau, were recaptured. It is uncertain what degree of involvement either de Real or Syke had by this point, although they were still officially part of the Weimar establishment.

It is unclear exactly what happened on 1 February 158, but the result shows all the signs of a cataclysmic event leading to the total destruction of the Weimar homeworld. On the other hand, since then, occasional indications that some Weimar operatives are still active have been discovered in that area of Shadow and further out, hence the status of the Weimar Republik being classified as “unknown” rather than “neutralised”.

The Weimar Republik was a military dictatorship under Führer Ernst Keller, and his three most trusted advisors: RFSS Sofia Halbeck, Helmut Eckart and Alfred Weber.  The government was run under the auspices of the Nationalsozialistische Weimar Arbeiterpartei, under the Party Chairman, Dr Hans von Karlstein, a career lawyer and politician, who appears to have been a Weimar native: unlike various of the other Weimar higher-ups, there were no records of anyone of his name and profession within the Reich, as far as Sable has been able to ascertain.

Weimar itself comprised one major continent, about the size of Europe and Russia, at northern hemisphere latitudes. There were also four minor landmasses, further to the south. The climate on the Weimar Continent was much the same as Europe, although some of the southern landmasses were distinctly hotter and drier. The population were human, and totalled around 250m on the main continent, with a further 200m scattered across the smaller landmasses. The capital was Weimar City, on the coast of the Northern Continent.

Weimar and the remaining Occupied Territories were running roughly 1.2/1 relative to Sable. It also became apparent that whatever the natural day/time cycle was on the Occupied Territories worlds, it is now the 365/12 standard, matching Sable and the Reich, indicating that part of the process described below changed the calendars of those worlds.

When Weimar was discovered, the tech level in the Republik itself was in the late-2010s. Unusually for such a high tech world, magic was both known and active, and worked with efficiency, which suggested that technology might not be the only thing that has been artificially changed. Computer and networking technology across both the Republik and the Occupied Territories was at the top end of the range for the late-2010s, with some systems higher than that. Morover, the technology also included elements of both New Oceania and Technocracy magi-tech. Portable computing and smartphones were common among the upper echelons of the Party and Military, but restricted below that.

The networks and systems were largely technological, but with magical elements, and it was obvious that much of the infrastructure backbone had Technocracy/New Oceania elements. Within the central worlds there was previously a full cellular network system, and it was proven that certain Nexus initiates could tap into this. This proved to be a major vulnerability, which allowed the Sable team to insert the Namenlos virus into the core systems. After the virus was released, the Weimar homeworld reinforced its barriers at the expense of the defenses around the six Shadows surrounding it, and no Sable or Technocracy agents managed to return to Weimar itself thereafter to study how it was affected.

Weimar also had a fully-implemented ID system. This had a technological twist to it, as well as just a magical one, which was recognisable as having been influenced by New Oceania. Until the virus was released, the system had full coverage on Weimar itself and the fully-controlled worlds, and partial coverage on the other Occupied territories. The encryption was far higher on ID originating from  Weimar itself, however. After the virus was released, while some variant of the ID system was still operational on four of the six Shadows adjacant to Weimar, it became non-functional on any of the other previously-held Shadows, including Sarendon, Tankarat and Baledevar, the only remaining Shadows outside the quarantine zone where Weimar had a significant presence, and which also happened to be the base of operations for the Reich forces.

Technology Levels as a Weapon of Conquest

The modus operandi of conquest by Weimar followed a similar pattern across all the Occupied Territories. First, an initiate of the Weimar power (usually Eckart or de Real, but occasionally Halbeck), accompanied by a small group of highly-trained soldiers, would go to the target Shadow and establish themselves in a secure location. Once this was achieved, regardless of the native tech level of the target Shadow, the operative would raise it towards the late-2010s level of Weimar itself (although not always achieving the full increase). Depending on the tech level that needed to be redefined, this process usually took several weeks, to avoid destabilising the target Shadow. During this time, the Weimar forces would move into position on the borders of adjacent worlds. Once the boot-strapping process was completed, the Weimar troops would roll over the border and move into Blitzkrieg mode, bringing their higher-tech weaponry to bear against the target population.

The success rate using this method was considerable, although the time taken to achieve Weimar’s aims could vary. The shortest campaigns were just a few weeks, especially on worlds that started the furthest down the tech scale. Some worlds managed to hold out for a year or more, however, as there were still some Shadows in the region that had been less than 50% occupied when they were discovered by Sable agents.