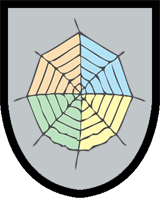 The Commonwealth is the trading bloc based in the three Shadow Veils immediately around the Magica Superior. The Shadows are linked by a network of Royal Ways. Most of the connections come directly from the Kingdom of Sable, notably in the lands outside Riversend. The Reich is not particularly popular in the Commonwealth Veils (with a few non-Commonwealth exceptions), especially since the expansion in SY100-105 to form the Outer Reich.

To be a full member of the Commonwealth is the equivalent of having both most favoured nation trading status, and a mutual defence pact with the forces at the Kingdom of Sable’s disposal. Originally, Sable merely reserved the right to have military bases within Commonwealth nations, with the proviso that military personnel were not allowed to interfere in the day to day running of the Commonwealth Shadow concerned, unless the Shadow requests such intervention. Since SY106, this has been varied such that there is at least one active Commonwealth Armed Forces base on each Commonwealth world, which is available as a resource to the native rulers of those worlds.

The Commonwealth is split into four Quadrants, which act as administrative blocs. 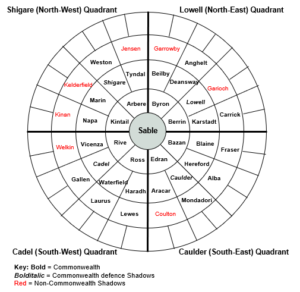 The four “Defence Shadows”, which give their names to the Quadrants into which the Commonwealth is split – Cadel, Shigare, Lowell and Caulder – have increased in importance since the foundation of the Outer Reich. These worlds are now primarily military bases, and are responsible for the defence of those Commonwealth Shadows around them. These maintain the same favoured trading status as the regular Commonwealth trading worlds, but are significantly more self-sufficient. In addition, some Commonwealth worlds, especially in Veil Three, have  concluded higher-level military treaties with the Defence Shadows in the last fifty-odd years.

Each Defence Shadow is ruled by an experienced military officer of Ducal rank. On these worlds, there is a compulsory period of National Service, which has to be undertaken somewhere between 18 and 25. Since the assassination of Duke Travis, on 21 February SY159, Lowell has been under the command of Field Marshal Prince James, who was transferred from  Abbeville in the Weimar theatre as operations there are winding down.

In addition to the official Commonwealth worlds, the Veil Six Shadow of Khachuran, along with its Veil Six neighbours, Teruel, Landsden, Annency and Carlisle, were placed under Sable’s military protection in late-SY105, following the concluding of the Outer Ring Treaty. These have also signed Commonwealth trade treaties akin to those of the four Defence Shadows within the main Commonwealth Veils.

The Khachuran Group is administered under the purview of the Royal Commonwealth Army. As well as a significant army and airforce presence on all five worlds, there is also a detachment of White Guard assigned to Khachuran. The original commander on Khachuran was Duke Aldous Collins, who agreed to come out of retirement to take the position. The current Protector, Duke Callum Fitz-Calen, son of Calen FitzWilliam (Duke of Cadel) was appointed in SY138.