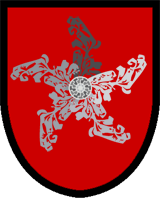 Due to its positioning and some clever jiggery pokery when Magica Superior was created, the Reich did not originally have a group of contiguous trading Shadows in the way that Sable has the Commonwealth, or Azure the Ring of Sapphires. However, it did have a Free Trade Association of sorts, Der Aussenhandel der Reichsverband.

Physically, the Aussenhandel Shadows existed in the Outer Ring, between the Commonwealth and open Shadow, thus putting them in Veils Four, Five and Six. However, they were attached to the Reich lands on Magica Superior by a system of very specialised Imperial Ways. These twisted through Shadow to circumvent the Commonwealth worlds which, were Shadow geometry Euclidian, would be the closest to Magica Superior itself. 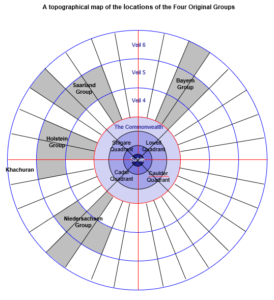 The Aussenhandel Shadows had preferential trade and military agreements with the Fatherland, and the Reich reserved the right to have military bases within those nations. In each formal group there was one military Shadow acting as guardian and protector for four other, more regular trading Shadows, including one or two agricultural or semi-agricultural worlds in each group. Thus each unit of five Shadows was effectively self-supporting, should it be required, which was not impossible given the vulnerability stemming from their only connection to the Fatherland being down the Imperial Ways. All were set up for trade – agricultural or industrial – and commerce existed with between them, the other groups, and the Fatherland itself. As with the Commonwealth, the four groups were named after the military Shadows at their hearts. These military Shadows were always located in the Fifth Veil, although the location of the others within their groups varies.

Each of the Aussenhandel Shadows had either a military (Reichsprotektor) or civilian (Gauleiter) governor from the Reich, and while not technically the Heads of State on these worlds – with the exception of the military Shadows – these governors had the right to interfere in Shadow politics and bring in external forces if to do so was beneficial to the Reich. The Reichsprotektors were the senior Reich officers in each group of Shadows, and all held the rank of Obergruppenführer or higher.

Tech levels across all the blocs were at least 1900 technology, and the majority of them were as high as 1940 or more, whereas in Sable and the Commonwealth, a lot of the technology is magic-based, except in the very advanced Shadows. In addition, magic was functional in the Aussenhandel Shadows, should it be needed. Industrial technology traded onto Magica Superior did have to be sufficiently modified to account for the lack of petrochemicals on the Primal Shadow, thus mech-tech mages worked with the Aussenhandel industrial concerns for that purpose. In addition, about half of the Aussenhandel worlds had a strong agricultural base as well as an industrial one, and acted as the breadbaskets for the other Shadows in their groups.

The primary forms of bulk transport were shipping, zeppelins and later the Aurellis Transport System. Of these, the ATS was the only one which allowed direct transit from one group to another: the other methods of transport all had to route via the Fatherland, due to restrictions in the setup of the Imperial Ways.

Within the Aussenhandel Shadows, there was a similar split of population to the Reich itself, with the 80% of predominantly European stock having the status of Aussenhandel Citizens. While this was not quite as prestigious as being a full Reich Citizen, it did mean that they are accorded better status than Reich Non-Citizens. Moreover, it was much easier for an Aussenhandel Citizen to ultimately take Reich Citizenship if they chose to.

For the first century of Sable and the Reich, the split in influence between the two nations in the first Six Veils of Shadow remained relatively stable. This changed after mid-RY099, however, when the Waffen-SS under Jürgen Kessler (now Reichsprotektor of Sanguine) launched a Blitzkrieg from the four military Aussenhandel worlds, across the western and north-western quadrants of the Outer Ring. This expansion was backed vocally and enthusiastically by RFSS Delatz, and was undertaken in defiance of orders to the contrary from Kaiser Wilhelm and the Wehrmacht.

Over the next five years, Waffen-SS and Sable forces fought a bitter conflict, but from the very beginning, Sable was on the back foot, and was overwhelmed across multiple worlds. It was discovered later that the Waffen-SS build-up that allowed this to happen had started a year earlier, while Sable had been lulled into a false sense of security at the apparent stability of the preceding century. What saved the whole of the Outer Ring from coming under Reich control was the fact that the Wehrmacht forces, reporting directly to the Kaiser, did not engage with the Sable forces and, indeed, may have offered them tacit support.

Whatever the truth of the matter, by June RY105, the Reich had effective control of the majority of the Veil Five and Six worlds in the north and west of the Outer Ring, and had made some inroads in Veil Four, especially in the Shigare Quadrant. Then, for reasons that remain unclear, the Waffen-SS attack was halted in July RY105, and negotiations were opened between the governments of Sable and the Reich, with participation from the SS.

The result of these negotiatons was the Outer Ring Treaty, the first formal treaty ever signed between Sable and the Reich. Under the terms of the Treaty, Reich kept its gains Veils Five and Six, but surrendered all captured worlds in Veil Four (with the exception of those which were part of the previous blocs). In addition, the security of Sable-held Khatchuran, and its neighbours in Veil Six, was guaranteed. Moreover, the Reich agreed that military administration of this new, contiguous bloc, would be split between the Waffen-SS and the Wehrmarcht. Finally, the Reich guaranteed that it would make no further attempts to expand in the Outer Ring, or ask for new Aussenhandel-style blocs. To the surprise of many, it has abided by this agreement.

The 35 worlds which make up this new, contiguous Reich territory in the Outer Ring are known collectively as the Outer Reich. The Reichsprotektorat of Saarland is generally considered to be the Capital World of the Outer Reich, with secondary capitals in Niedersachsen, Holstein and Bayern.