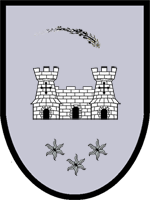 The Kingdom of Argent

Argent is the Primary Realm in the Outer Lands (or Sky Shadows) of the Terra Magica system: the somewhat ghostly worlds which seem to exist as much in nightly dreams, as in reality. As with Sable and Azure, there is a full Shadow system extending from Argent itself, although there is no trading belt in the way there is in either of the more corporeal realms.

The Sky Realm is reached from the higher of the two peaks of the King’s Isle. A formation of rocks leads up to a staircase which connects to the city after dark, much like the Tir-na Nog’th steps in Amber. The capital, Argentis, is laid out with elements reminiscent of both Sable City and Azura, but on a much smaller scale, with a native population in the region of 15-20,000, plus visitors, making it more like a country market town than a busy city. A comparatively high student population also gives it something of the feel of a university town like Oxford or Cambridge.

The staircase comes up into a broad square, surrounded by impressive buildings, like the civic square of a large market town, which usually appears bustling and busy, teeming with life. A number of streets lead out of the square, including one down to the harbour area. Others slope upwards towards Argent Palace, which is situated on the equivalent of Sable City’s caldera rim, although the gradient of the slope is more gentle than in Sable. The layout of the rest of the city, and the architectural style, however, is more similar to Azura: smooth lines and spires, with buildings apparently made of glass and ceramics, and smooth-sculpted stone, and the important buildings shine in the moonlight as if decorated with gemstones.

The palace itself is impressive, built of white marble, with tall spires giving a fairy-tale appearance. It is set in parkland along the rim of a reflection of the Sable City caldera. A silvery bridge of light can be seen extending from within the palace grounds out over the Lake Muireann, which fills the caldera below, but what it reaches is indistinct. The palace compound is surrounded by a wall about fifteen feet high, with an substantial gate house facing the route from the market and guards always on duty at the gate. There are formal gardens around the palace precincts, where it seems to be eternally spring, with the origin of the light bridge behind the palace, in direct line from the gatehouse. The mansions of the Twelve Houses skirt the Rim Park, shining like jewels in the night.

Outside the city, the countryside is primarily pastoral, with farmland and small villages, interspersed with occasional market towns. There is no obvious heavy industry and certainly no apparent manufacturing. There is some light industry around the towns, where many of the necessities of the country are made, usually by hand, and cottage industry is common throughout Argent. The realm certainly seems self-sufficient for everything it requires.

The people of Argent appear to consider Sable City to be a dreamland, and their perception of visitors is as pale strangers. What their own perception of each other is, is unclear.

The People of Argent

To the visitor from below, Argent is populated by pale figures with something of an otherworldly air, going about their own business. To the visitor, it is completely silent, save for the sound of a gentle wind which seems to blow from nowhere. This can be rather eerie to the inexperienced, although the figures can be seen speaking with each other, so there obviously is another level of communication between them which is perhaps in a different ‘phase’, for want of a better term, to that of visitors from the outside. Transport is primarily on foot, although horse-drawn carts and carriages, and riding horses, are sometimes seen. In appearance, there seem to be two races, or perhaps classes, living there – the tall, thin, almost Fae-like nobles, and the more obviously human general population. Colouring for both is usually pale, as if seen in bright moonlight, although there are an infinite number of shades within that.

The Argentian people do have some ability to interact with visitors, especially members of the Sable Royal Family and others of a magical persuasion. Occasional visitors to Argent from Sable have reported that the normal people who live there move around them, as if they know something is there but cannot perceive it until some form of arcane connections is made to them. At that point, the city seems to come into focus for the duration of the contact, even gaining some colour, and the sounds of the city seem to come into phase, so the visitor can hear the noise around him or her, as if it was a normal market town. Once the individual is in focus, it’s quite possible to have a conversation, or make deal, or have a game of cards, etc with that individual, even without maintaining the arcane contact, and should they introduce you to others then they, too, can communicated and interact with the visitor. However, as soon the interaction is finished, they lapse back into insubstantiality and the silence returns. Little interaction has been reported with the Argentian nobles, although what few reports have come back to Sable seem to indicate that they have more awareness of visitors, and can initiate contact themselves.

It is uncertain what the average life expectancy of the people of Argent is, as rather than die in the way a visitor from Sable would understand, when an Argentian reaches his or her allotted span, or feels their time has come, they will either pass to the Isle of Dreams, or just fade away. The rate of childbirth is roughly the same as in Sable, although the native population of Argentis itself seems to remain relatively stable.

Religion in Argent is a somewhat free and easy affair, and its central tenets relate to living in harmony with nature and people having respect for the world around them. The religion is duotheistic, with the sun and moon representing the two manifestations of the life force within nature, and they also pay a great deal off attention to natural phenomena such as comets, shooting stars and eclipses. The most important celebrations within the religion are the equinoxes and the solstices.

Education is prized and all children are expected to attend school until at least sixteen years of age. As far as further education is concerned, there is a large university for the size of the population, with a student body of around 4,000 plus the faculty, which includes the Argent Mage College. Students come from all over Argent to attend.

The ruler of Argent is King Cathal, son of King Robert of Sable and Queen Claire. Technically, he is absolute monarch of Argent, and has the right to rule alone. However, in reality, he governs in tandem with a Privy Council, made up of the Heads of the Twelve Houses of Argent. There is no form of elected government, and even the mayors of the individual settlements are selected, rather than elected. Duke Raibeart d’Argentis stands as Regent for Cathal in his occasional absences.

As far as the military is concerned, there is a small, dedicated Royal Guard, which serves the combined purpose of protecting the King and the Royal Palace, and also acting as the police force within Argentis. The Kingdom of Argent also has a small but highly efficient volunteer standing army, commanded by Prince Vladimir.

Two forms of magic are commonly practised within Argent. Primarily, there is a form of Talent-based magic which resembles that taught in Sable, albeit the focus and classes are slightly different, with more emphasis on healing, natural and illusion magics, and less on areas such as structural or industrial magic. Roughly 10% of the population has the potential to learn magic at its most basic level, with a further 10% showing Sensitive abilities, which is significantly higher than in Sable. Of the 10% of Talented individuals, maybe 1 in 50 has the aptitude to take their magical studies any further.

In addition, the families of the Twelve Houses demonstrate a suite of abilities they choose to call ‘Night Magic’, which bear a more than passing resemblance to the tricks and glamours of the Fae of Celtic mythology. This form of magic can only be learned by members of those houses, or by those who are lucky enough to marry into them.

Ritual magic is not studied except by the priesthood, who are taught it because of the ritual elements to the practise of religion within Argent.

Shape shifting is also relatively common in Argent, with about 10% of the population having the genetic marker which, if activated, could allow them to become a shape shifter. Of these, in approximately 1 in 5 the gene is active to the extent that they will rarely get sick, they will heal quickly from injury and they can survive wounds which would kill a normal person, but only about 1 in 20 of those have any measure of active control, be it merely the ability to take another form, or the full suite of basic shapeshift abilities.