The Geometry of Shadows 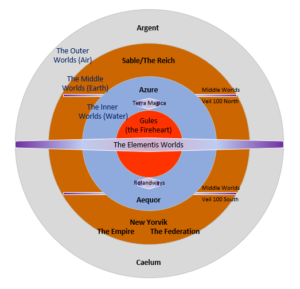 At the very heart of the Sable-Aurellis Continuum are the worlds of Terra Magica (in the North) and Rolandways (in the South). In a cavern below the basement of Millbank Manor on Terra Magica is the Sable Primal Pattern, of which the other Designs of Order in the Sable universe are the Primary Reflections. Terra Magica itself is inaccessible from the Sable universe, except by King Robert and those he chooses to tell the secret to. A similar arrangement exists with Rolandways and the Prime Iteration of the Aurellis Logrus (in the South).

Individually, both the Sable Pattern and the Aurellis Logrus cast their own systems of Shadows: the worlds that depend on their central Powers for their existence and make up the majority of the multiverse. The two systems were brought together by Robert de Lacy and Roland Helgram on 1 February SY100 to form the Sable-Aurellis Inside Continnum.

The Continuum as a whole is divided into four Realms:

For an aid to visualisation, think of the Fireheart as a stone, and the other three Realms as paper wrapping that stone.

Some years after the Inside had been formed, it was discovered that an interference pattern was being set up across the worlds of the Centre across all the three accessible Realms (at that time, equivalent to roughly Veils 95 North to 95 South, with Veil 100 at the Equator). This risked damaging the integrity of the Inside as a whole. To solve this problem, the third Inside Major Power, Elementis, was Created at the Equator on the Spring Equinox in SY118.

The Elementis Worlds (which are somewhere between 50k and 60k in number), comprise the Equatorial Veil of Shadow (now Veil 200), and the five Veils either side of it (195N to 195S). These worlds transect the Sphere of the Continuum across all four Realms (with the exception of a posited void in the centre of the Fireheart), and bind together and balance the worlds of the North (cast by the Sable Pattern) and the South (cast by the Aurellis Logrus). 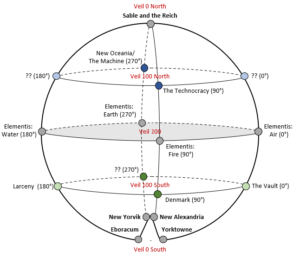 Of the four elemental Realms, the Earth Realm is the equivalent to “normal” Shadow on the Outside. As a result, the vast majority of the Sable Game takes place in the Earth Worlds (with the occasional diversions into the Air and Water Realms).

The graphic to the left represents the Sable Game universe, including the placement of the known (and assumed) Powers on the “Inside”.