Sable: Life in the Kingdom-2

Life in the Kingdom of Sable

Literacy within Sable is around 96-97%. There is a comprehensive state education system which is free and available for all children up to the age of 18, although they can leave at 16 if they wish to go into an apprenticeship. Public examinations are usually held at 16 (‘Ordinary’ level qualifications) and 18 (‘Advanced’ level qualifications), although particularly gifted students may be able to take these early. There is also a parallel private school system for those who would prefer it for their children, either because they believe that private education is better than the public system, or they feel that the ‘Old School Tie’ is important for the future, or because they want their children to go to a religious school denominated to a faith other than the Church of Sable. The academic year runs from early-September to mid-July.

About 15% of Sable teenagers go to university, usually at 18 or 19, although there is the potential to go up early in exceptional cases. With the exception of Sable Mage College, which has a different charter and structure to the rest of the Sable higher-education system, the university system is organised under the banner of the University of Sable. The UofS has campuses in most towns and cities with a population of over about 50,000 people. The campuses in the main cities generally cover a wide range of courses and are considerably larger than those in the smaller population centres, where the campuses more often cover specialist areas, for example the prestigious Lacey School of Art in Avonbridge. A further 20-25% of teenagers will undertake some other form of vocational higher education, often at local colleges or occasionally on day release to the smaller university campuses. Non-magical undergraduate university courses are of three to five years, depending on the subjects studied, with graduate courses (Masters, Doctorate) ranging between one and three years.

Grants are available to potential students, but on a means-tested basis, which means that those children whose parents are in less well off circumstances have proportionally more of their university funding paid for by the state, while the wealthier families are expected to contribute more towards their children’s education. In many cases, scholarships are available, both from the individual colleges and universities, and from the Government. All academic fees, and grants for a reasonable standard of living, are funded by the Government or the Local Authorities for all students going to Mage College, regardless of background.

Additionally, given the extended life expectancies within Sable, it is not unusual for adults to return to education – both magical and non-magical – to take selected courses, a delayed first degree, a full second degree, undertake a post graduate course, or any combination thereof , at any time, and often some years after they originally graduated. For the majority of non-magical courses, the mature student would be expected to pay their own costs, although for a delayed first degree or later other courses, grants are occasionally made available. For post-graduate Mage College courses, government grants can be made available for up to 50% of the cost of the course, with employers often contributing the remainder in return for the student agreeing to work for them for a set period of time after graduation (usually between two and five years).

The Church of Sable is the state religion of the Kingdom and certain of the nearer Commonwealth States, with approximately forty percent of the Sable population (including many of the Royal Family) attending services on at least a semi-regular basis, and another twenty percent observing the major festivals. It is a monotheistic religion founded on Judeo-Christian principles, but is a strange mixture of the Church of England and some of the older Protestant faiths in beliefs and attitude. The faith is Trinitarian, and believes that God sent his son into the world to try to redeem it. The crucifix is probably the main religious symbol of the CoS, although sometimes a tawny panther is also found in CoS churchs. The Patriarch of the CoS is Archbishop Dennis Dessain, who has his seat at the Cathedral of St Michael and All Angels, in Sable City.

There are also a number of smaller religions within the Kingdom of Sable, with a diversity of beliefs and ritual.

The Sable Police Force is split into two main bodies: the Metropolitan Police, and the Royal Sable Mounted Police. The Metropolitan Police operate within the city limits of all the major population centres of Sable (population of 20,000+), while the RSMP covers the remainder of the country. The combined force deals with all general policing within the Kingdom of Sable, and occasionally co-ordinates with the security forces and the Royal Guard in matters of State and diplomatic security.

The Met operations in each city are run by their own branch hierarchies, each reporting to a local Police Commander, and therefore a Met officer from one city will need to check in with the central police station of a city he may need to visit, to establish his credentials. However, this is very much a matter of courtesy, as the individual Met branches are ultimately part of the same overall force, and know they are working to the same goal.

The RSMP is a more homogenous unit, with a single Commissioner based in Wickstone, in the centre of the country.

For the most part, the Met and the RSMP are run as two separate forces. However, they have been known to co-operate on cross-jurisdictional cases. To expedite this, there is a central office – the Office of the Chief of Police – based in Sable City, which comprises representatives of both of the forces, reporting to the Sable Commissioner of Police, John de Lyon, the highest ranking officer within the police force.

Transport Around the Kingdom

The primary methods of mundane transportation around the Kingdom are by road and rail. The railway network is very extensive, and has become more so in the last fifty years or so. The road network is decent and kept in good repair, but the largest roads are trunk roads. It does not have a motorway system.

Another major artery for trade and commerce is the Sable River, which rises in the mountains to the south-east of the Kingdom, is navigable within the borders of Sable, and is the only river which flows off the plateau, as well as onto it, meeting the sea at Riversend. The distance from the river where it enters Sable to Riversend is about 300 miles.

In addition, there used to be an airship cargo service, but with the building of a railway line parallel to the river, transporting cargo by airship became uneconomic, and this service was suspended. 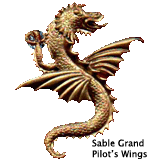 In early  SY104, a new method of transport was introduced, the Aurellis Transport System. This provides virtually instantaneous travel to the major cities in Sable, although it is not particularly cheap. As far as cargo is concerned, perishables are often taken through the ATS, but heavier, bulk or less urgent products go by road, rail.

A luxury airship service was established in around SY140, using brand new dirigibles, for those who have the money and time to spend travelling Sable in a very civilised manner. Operations extend over the Sable Mountains to the rest of Magica Superior . As these are lifted by safe, helium gas, and driven by magic, the service is considered one of the safest means of travel.

Sable has an audio broadcasting system using crystals and communications magics, based on the foundations of the point-to-point comms-crystal system which has been available in Sable for many years (effectively the Sable equivalent of walkie-talkies/mobile phones). Within the last twenty years, it has also become possible to broadcast pictures magically, to dedicated receivers. Wire-based telephony is also available.

Crystal broadcasting involves a central station transmitting on set frequencies. Crystal receivers can be purchased within Sable City, the major industrial towns and cities, and the Commonwealth, and at the flick of switch, the channel being received is magically changed. Receiving crystals are tuned to receive broadcasts from the four radio stations in Sable City, and two video-based stations – which specialise in News and Current Affairs, Light Entertainment, classical music, and jazz and folk music. The stations are nominally State run, à la the BBC, but there is little government control of what can be broadcast

Recorded audio and visual entertainment is also available, in the form of rented sound and illusion crystals: these have a play, performance or other such programme set into them by means of illusory and entertainment magic. Magical players for both audio and video are available (albeit that the former are more common) which will effectively give a perfect reproduction – and in the case of video, three-dimensional – of the recorded material.

There are five main newspapers commonly available in Sable, plus a number of other, smaller circulation publications, often with a local bias. Freedom of the press is enshrined in Sable Law, although a Thirty-Year Rule applies to the release of sensitive information, and the government also reserves the right to apply a D-Notice in certain circumstances, which restricts reporting on a specific subject while the Notice is in force (for example, military operations currently being undertaken, if real-time reporting is deemed to be hazardous to the forces involved).

This is the main government paper, published daily in broadsheet format. Its focus is mainly on reporting events in the Kingdom and on Magica Superior as a whole, although it does have journalists reporting from the Commonwealth. Its reporting is relatively well-respected. Its daily circulation is around Sable and many of the Commonwealth Shadows.

Published daily in broadsheet format, this publication is known for good, unbiased reporting of both Sable and Commonwealth news, as well as having a very highly regarded correspondent in Berlin. The paper is widely available throughout the Commonwealth

Published on weekdays only, in broadsheet format, this mainly reports what is happening in the Commonwealth, although there are sections on important events in the Kingdom. It has a Commonwealth-wide distribution. It has a particularly strong Commonwealth arts and media section.

Published weekdays in tabloid format, and very much the mouthpiece for the opposition, the Post is largely Sable focused, although it does have offices in the main Commonwealth Shadows, and a representative in Berlin. Some of the writing is relatively intelligent, although it has a tendency of trying to appeal to the lowest common denominator in the newsreading public.

Published daily in tabloid format, this tends towards sensationalist journalism rather than unbiased reporting of the news.
Back to the Kingdom of Sable Index