Slightly to the surprise of the general population of Sable, there has alwas been a Reich Consulate within Sable City, which has handled the interests of those Reich Citizens who have a legitimate reason to be in the city – for example, commerce, education, journalism, etc – and tries to promote the more palatable sides of the Reich within Sable. Since the signing of the Armistice, this has been upgraded to a full Embassy, effective 1st January SY 155. 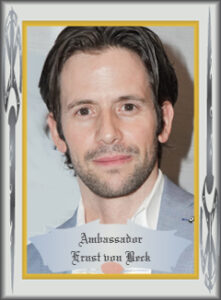 After an attempted assassination against King Robert and the former Reich Ambassador, Gottleib Karsten, at a gala opera performance in November and incidentally King Robert, Karsten was no longer seen as a safe pair of hands by the Reich, and he was recalled. Ernst von Beck, son of Hendrik von Beck, and nephew to the Kaiserin was appointed as the new Ambassador, and presented his credentials to the King of Sable on 1 February SY 156.

As one of his conditions for the post, he requested that he be allowed to bring his beloved German Shepherd, Giro, with him. The request was granted, and Giro duly arrived in Sable with his master. The hound later died in a road traffic accident.

Adalheid Ansgar’s appointment as Reich Deputy Consul, in February SY152, caught a lot of people by surprise. Until that time, she had been serving as Kaiser Wilhelm’s Chief of Staff, having worked up to that position in a long and illustrious career as a diplomat. Therefore, her posting to Sable is seen by many as a demotion, although exactly what she is being punished for is far from certain. The fact that her appointment was championed by the Reichsführer-SS also raised a few eyebrows, as Imperial and SS staffing matters are usually kept separate. Whatever the reasons for her appointment, however, since she arrived and presented her credentials, she has quickly settled in her post, and earned the respect of Sable government and diplomatic circles.

Fraulein Becker is one of the three new appointments to the senior staff of the Embassy, having arrived on 1st January SY155, to replace Walter Pohl, who had held the position for over ten years. She is Talented, with a knowledge of Mech-Tech magic, and went to Mage College instead of doing State Service. She spent some years as a practising industrial mage, before becoming more interested in the economics behind manufacturing, rather than the manufacturing itself. She returned to the University of Berlin, to take a degree in business and economics, and then joined the Office of the Five-Year Plan. She was drafted into the diplomatic service about ten years ago, holding similar positions in Embassies within the Aussenhandel der Reichsverband. However, she is still a relatively unknown quantity in Sable.

A serving officer in the Reich SS, Wasser is one of the least liked and least trusted members of the Reich delegation, coming as he does with a full set of the beliefs and prejudices which typify the more extreme elements of the Reich, largely due to his upbringing as one of the Lebensborn. His main duties relate to the security of the mission itself (rather than the people within it). He has been in Sable for about six years. Wasser looks to be in his mid-thirties, with short black hair and dark eyes. It appears that he and Wolfgang Metz, the Sable Secretary of Defence, have some unpleasant past history. However, for the most part they stay out of each other’s way while in Sable City.

Former boyfriend of Princess Elaine, now back in Sable after being recalled to Berlin following an embarrassing incident which he has now publicly stated that he regrets. His family remains supporters of Kaiser Wilhelm, hence the powers that be were persuaded to overlook his faux pas on his previous visit. Learning that Elaine now has a son and daughter has been something of a shock to him. He is still willing to listen to both sides of an argument, but is a lot more circumspect about how he does this than he used to be. Bouhler appears to be quite young, in his late-twenties.

Like Laura Becker, Ferdinand Weber rotated into Sable on 1st January SY155. He is responsible for all legal matters to do with the Reich Embassy, its accredited representatives and its dealings with the Kingdom of Sable. He is also available to any Reich Citizen requiring legal assistance while in Sable, and is likely to be called in by the Sable police if any visitor from the Reich has been arrested (for anything from being drunk and disorderly to treason).

He is the son of Hermann Weber of Weber Munitions, but instead of going into the family business, he initially chose to join the military, first doing his State Service with the Ausland-Heer, but later transferring to the SD. However, he quickly realised that his interest in the law was more academic than practical, and moved to the SS Legal Department where, after a couple of years as a legal clark, he was sponsored to study Law at Berlin University. He remained with the SS for about ten years after graduation, before moving into government, working first in the Reich Chancellery legal department and later directly for the Ministry of Justice and Legal Affairs. His range of legal experience was the main factor in his appointment to the Sable Embassy, which is his first diplomatic position.

Lina joined the Sable Consulate about eight years ago, having previously served in Reich missions in Shadows within the Commonwealth Veils but not, as yet, members of the Commonwealth. It is her job to make sure the Reich Mission doesn’t suffer from too much adverse publicity, and indeed promotes some of the Embassy-sponsored events to try to show her country in a positive light. She appears to be in her late-thirties, and has bobbed blond hair and blue eyes. She is calm, professional and reasonably well liked by the Sable Press Corps, with whom she has the most dealings. She also makes a point of not discussing her own politics in public.

One noticeable change in the organisation of the Reich Mission since it was upgraded to a full Embassy, is that Diplomatic Protection is now handled by the SS, rather than the Heimat-Wehrmacht. This revision of arrangements is also likely to be in response to the attempted assassination of then-Consul Karsten in November SY154. The Sable authorities have not particularly welcomed the decision. Responsibility for the protection of the Reich diplomats in Sable now falls on the shoulders of Werner Detlef, DMg, a career officer with first the Waffen-SS and latterly the SD, who was appointed as a Companion of the Knights of the SS in SY149. Major Josef Graber, the previous incumbent of this position, has returned to Berlin.

Erich Stuke replaced the previous accredited representative for Die Welt, Heinrich Straße, who returned to Berlin in August SY152, but more recently has not been apparent in the Reich, Sable, or their respective trade groups. Stuke is the son of a Colonel in the Heimat-Heer, who opted to do his State Service in the military. After his State Service, he spent five years in the regular forces, coming out with a captain’s commission, before going to university to study German, English and journalism. He interned for a while with the RDP, before getting his first journalistic position with Die Welt in the city of Danzig.

Prior to his posting to Sable, he spent several years in the Bayern group of Der Aussenhandel der Reichsverband, and also covered the formation of the Neubrandenburg Group. He first requested posting to Sable about three years ago. However, at the time Sable was not looking to end its accreditation of Straße, and therefore declined his request. With Straße’s ongoing sabbatical, Stuke was accredited to Sable City in his colleague’s place in early SY154. He appears to be a dedicated newsman, whose reports have thus done nothing to annoy the Sable authorities.

Mariele von Henning is the youngest daughter of Herzog von Potsdam. She is Talented (from her mother) and chose not to undertake State Service. She debated becoming a lawyer like her father, but in the end chose to join the Orpo as an investigative mage. About five years later, she transferred to the Kripo, where she remained for a further decade, before changing tack completely, to become a lawyer on the legal beat of Das Tag, which did not particuarly endear her to her former employers. However, she proved to have a flair for the subject, and quickly became a well-respected correspondent.

She is famously apolitical, and it is probably this quality which primarily recommended her to her paper as the replacement for Amadeus Heider, after he annoyed the Sable authorities one time too many, with his reporting of the attempted assassination of Gottleib Karsten. She arrived in Sable in December SY154.