The Technocracy was founded on 1st January, SY 120, as a solution to the instability which had been created when the outlying Shadows belonging to the Pattern Realm of Sable and the Logrus Realm of Aurellis began to interact after the realms were brought together to form the Sable-Aurellis ‘Inside’ system. After careful research, King Robert of Sable (and, independently, Herzog Rupert Delatz of the Reich) realised that the only cure for the problem was the inscribing of a Neutral Power on the border of Sable Shadow and Aurellis Shadow and, with the agreement of Roland, Pater Deorum Aurellis, invited his eldest son, Prince Andrew, to write the Power.

Andrew is Prime Interface and Chief Programmer of the Nexus System, which was his brainchild. Son of King Robert of Sable, their close relationship means that Sable is a natural ally to the Technocracy, although the two worlds are very different, and there is little commerce between them. However, they do have a Mutual Defence Alliance for matters military and Andrew is personally influential within the Sable sphere of influence.

Niamh encountered the Technocracy before she actually first met the Prime Interface, in the period when the Master of the Machine was attempting to exert his influence on the Nexus. Andrew met her in Shadow, and helped her find herself again, and they married in April SY150. When he is away on his work for Sable, she acts as the Warden of the Primary Node, and runs Nexus Prime in his stead. She and Andrew have three children: Lucy, Abigail and Jonathan.

Lucy is the eldest of Andrew’s and Niamh’s three children, and also the most “otherworldly”. Her link to the Nexus Datastream is second only to Andrew’s. Most of her existence is within the Nexus, where she acts as its Keeper and Controller, although she does have an external avatar should she feel the need to venture out.

The Council of Twenty

The Council were created to assist the Prime Interface in the running of the Technocracy, and deal with a lot of the day to day operations, including organising clearances, maintaining the integrity of the data stream, and monitoring usage. All are strong mages, into whom Andrew imbued a reality well above the human norm, and all are exalted initiates of the Nexus. Except for very rare occasions when the Prime Interface becomes involved, it is the Council who are responsible for overseeing initiation to the Nexus. Ten of the councillors are permanently stationed on on Nexus Prime, with five councillors at each of the Secondary and Tertiary Nodes.

Effectively the Primal Pattern of the Technocracy system, at zero degrees on the circle which makes up the centre of the band of Shadow between Aurellis and Sable. The Power is situated within a cavern on Nexus Prime, the home world of the Technocracy, which was formerly one of the interface Shadows between Sable and Aurellis, where the influence of Chaos and Order were in balance. The Central Data Repository (aka the Core) is also located here. When the Nexus was drawn, the Rock of Creation it was on was rewritten and reformed to become a large, futuristic city of 500mn inhabitants, stretching for hundreds of miles in each direction from the Nexus Palace at its centre, until finally giving way to sea in one direction and mountains in the other. The Nexus world itself is now ruled directly by Andrew de Lacy, Prime Interface, and his wife Niamh, ably assisted by their eldest child, Lucy.

The Secondary and Tertiary Nodes

These are located 90 degrees east and 90 degrees west around the central band which makes up the Technocracy Shadows. They take the form of futuristic cities, set on green and pleasant Shadows, with their combined population equalling that of Nexus Prime. The Nodes themselves are strong reflections of Nexus Prime, much as Amber is of its Primal Pattern, or Sable is of Terra Magica, the believed home world of the Sable Royal Family.

Abigail and Jonathan are twins who were born and bred on Nexus Prime, and they both knew that their ultimate destiny was to be the Interfaces of the Secondary and Tertiary nodes, respectively. Initially Jonathan accepted this more willingly than his sister, but as they became more aware of the history of the Technocracy, and the early problems with the Master of the Machine, Abigail also accepted that what she was being asked to do was important.

Unlike Lucy, both Abigail and Jonathan (plus their half-sister Helena-Maria) are primarily human, although like their father and sister, they have an enhanced link with the data stream.

The fourth manifestation of the Nexus Power, situated 180 degrees from the Nexus itself, it is the dark opposite of the Technocracy and the implacable enemy of both the Technocracy itself, and life in general. 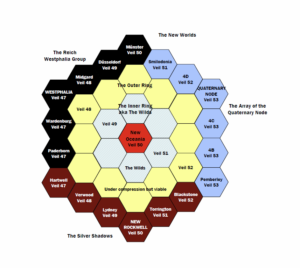 This is a secondary manifestation of the Nexus, brought into being long after the main Power, and is located out in the region of Shadow around New Oceania, and is the keystone of a group of six Shadows. It is ruled by Quaterary Interface Helena-Maria Latz.

Two of the other worlds in the group, Smilodonia and Pemberley have links to two other descendents of King Robert, but who are not children of Prince Andrew: Alexander Gibson and Rebecca von Kleist. In both cases, their connection with the Nexus is complicated.

Helena-Maria is the child of a previous relationship Andrew had after the death of his first wife, but before he met Niamh. She has spent several years working with him in his military duties for Sable, and is a capable and able military commander in her own right. He invited her to become Quaternary Interface with the establishment of the Quaternary Array, out in the region of Shadow around New Oceania, in late-March SY155. As her loyalty is more to him than to Sable, she agreed readily.