From Discovery until 31 January SY 158

The Weimar Republik became an expansionary force shortly after the inscription of the Muster Power. It worked on a simple three-step model.

1. A Muster initiate was sent to the target Shadow to bring up the basic tech level of that world, often by twenty to thirty years, unbeknownst to its inhabitants. In addition, whatever the natural day/month cycle was on those worlds, it was changed to 365/12 standard, matching Sable and the Reich.

3. Following the invasion, the Weimar system of government would be imposed, along with implementation of technological and magical ID and security measures. Weimar and its fully controlled worlds ran at roughly 1.2/1 relative to Sable.

Back to the main Weimar page 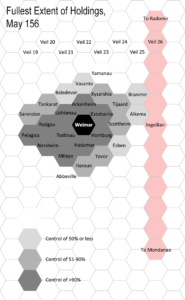 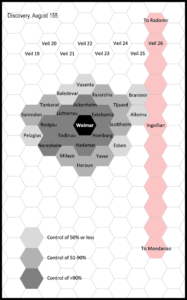 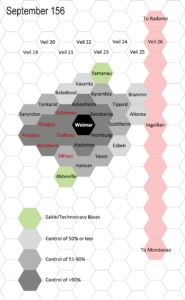 Starting in June 156, Sable and the Technocracy allied to establish a military presence in the area, both as a deterrent to further Weimar expansion, and as staging points for a future counter attack. They chose two worlds just outside the Weimar Bloc: Abbeville and Yamanau. Prince James was recalled from Murray to set up the Abbeville base, while Prince Andrew took responsibility for Yamanau.The same month, Sable forces destroyed a concentration camp on the partially controlled Weimar world of Yavor.

During the same period, the Reich became aware of the Weimar Republik, and Sable agents reported that they had occasionally seen their Reich counterparts in Weimar-controlled Shadows.

In early-September, a strong arcane barrier was erected by the Weimar Republik, isolating those six Shadows off from the rest of the Bloc, including all technological links, thus establishing the Quarantine Zone. This barrier defeated all efforts to penetrate it, until a Black Panther squad managed to crack a hole in the border around Pelagius. As soon as they did, however, they were attacked by two or three vicious new lifeforms, which moved exceedingly fast and didn’t pull their punches. The squad finally managed to subdue one of them, to discover that they’d captured a creature that looked and acted like the Sidhe of Celtic legend. Duke Michael agreed to take charge of it for study, and to try to develop some kind of understanding with it. It was assumed that such creatures were responsible for the earlier disapperances on that world. 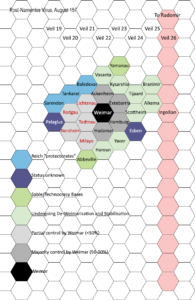 The uploading of the Namenlos virus directly on Weimar started the collapse, as it caused a great deal of disruption to all the Weimar systems – not just those in the Quarantine Zone.  It immediately started withdrawing forces a lot of the Shadows they had previously invaded, causing disruptions to systems and general problems as the Shadows try to stabilise back from their bootstrapped tech levels.By the following August, the former Weimar Republik Shadows were split as follows: 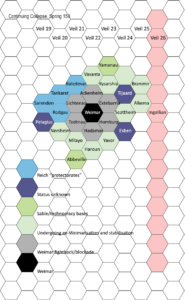 From August 157 onwards, the disruption from the Namenlos Virus continued to cause major problems for the Republic, which continued to pull in its horns. The Shadows it withdrew from continued to stabilise back from their bootstrapped tech levels, although none of them suffered as much as Tijaard.

Halbeck ventured into the former Quarantine Zone and recaptured the two border worlds that were within it, Lichtenau and Todtnau, by mid-December. Reports from the defeated Sable/Technocracy forces indicated that the Weimar troops had figured out how to gain the advantage in those theatres. In addition, it was suspected that Reich troops moving into the Weimar Bloc may have given the Weimar forces an added impetus to regain the two worlds. Many allied forces did escape, but there were significant casualties and prisoners were taken on both sides.

Helmut Eckart first came on the scene in September, working with a representative sent from Andreas Delatz, by the name of Graham Dorian, on solutions to Weimar’s problems. The instability on Tijaard proved an excellent testbed for them, as long as they could stay ahead of the Sable forces. However, by November, Sable forces had  become aware of their presence, and Andrew de Lacy was called in to deal with the problem (largely, as it transpired, because Dorian was a Machine Controller). This did not go entirely according to plan, resulting in a massive volcanic eruption that destroyed almost half of the Shadow, which then had to be repaired by King Robert and RFSS Delatz. It is believed that Dorian was killed, but Eckart obviously escaped, as he was seen later.