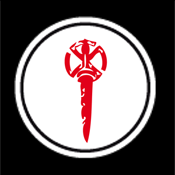 Sanguine was constructed by RFSS Delatz, as the Reich’s gateway to the Outside in tandem with Murray, for Sable, in RY105. The worlds around its physical location bear a certain resemblance to the Black Forest, the closer you get to it. It is not connected to Der Aussenhandel der Reichsverband, but acts as a trading gateway into the Reich’s sphere of influence, although details of its physical location are closely guarded. Transport to and from Sanguine is primarily via the ATS system, although certain mages and other influential individuals can reach the world by other means.

Sanguine is considerably smaller than Murray, having but a single landmass comprising about 300,000 square miles, plus outlying islands, the majority of which are used as military reservations. It has a standard 365.25day/12month/24hour calendar, a single time zone across the country and two moons (Freyr and Freyja) affecting tides, etc. The climate is mid-European temperate and with the exception of the mountainous areas, the majority of the country rarely gets that much below freezing, even in winter. The Northern Mountains reach above 8,000ft at the peaks, and host mining, forestry and hill farming, with the tree line at about 5,000ft. The Southern Mountains rise higher, to over 10,000ft, with the tree line at around 6,000ft and as well as their more commercial uses, are a major leisure area for those interested in winter sports.

The World of Sanguine

The total population is in the region of 35m Citizens and others from the Reich, plus a variable number of off-worlders, rather denser than Murray. The majority of the population is concentrated in twelve major cities, which are the centres of the twelve provinces of Sanguine. Eleven of these cities have populations of about 1-2m people, most of whom are involved in industry and services, while the capital, Neumünster, has a Citizen population of 3m, plus about 500,000 non-Citizens, as well as hosting the enclaves for representatives from other worlds, both trading and diplomatic. In addition, about 3.5m men and women, the vast majority of them Waffen-SS, are based on the military reservations, in case Sanguine needs to be defended against attack. Social attitudes, general beliefs and educational provisions are similar to the Reich itself.

The majority of the land is at 1,500ft or below, and highly fertile, criss-crossed by a number of rivers which rise in the Northern or Southern Mountains, and also often serve as provincial boundaries. It has largely been dedicated to industrial farming (both crops and livestock), mining, and forestry at higher altitudes, making Sanguine self-sufficient in terms of food production and resources, even allowing for the high percentage of the population under arms. Transport around the country is mainly by rail or road, although where the rivers are navigable, they are also used for freight.

The lowland farms are interspersed with a network of Bauernmarktstadten (market towns, which usually have both grain and stock markets) and Fischereihafens (fishing ports), in which dwell around another 3m people in total. There are other villages and small towns scattered across the landmass, but they mainly serve to support the farmers and provide facilities (bars, restaurants, the ability to purchase luxuries as well as basics) in the rural areas. Around 5m people are involved in actual farming to some degree (as distinct from the farmer’s market towns), with another 1.5m employed in the mining and forestry industries, primarily living in settlements at higher altitude. The industrial farms and the fishing industry produce enough food for Sanguine itself, and are still able to export the surplus, mainly back to the Reich and the Der Aussenhandel der Reichsverband, although some is available for sale to third parties.

Industry is centred around the twelve major cities, and with the benefits of producing its own resources, as well as having a strong industrial base, Sanguine is also self-sufficient in this regard. The native technology level is roughly equivalent to the 1950s. It is largely based on mech-tech magical technology, although there is some use of fossil fuels. Automatic weaponry works, as does the internal combustion engine, but no there is no nuclear science.

To the east of the city, about ten miles out, is the Einwanderungplatz, which is the main point of entry for visitors who have come to Sanguine down the Shadow paths. It is a large complex comprising immigration, customs, parking, Trump reception, and even a small airport, although people coming in by air are warned that jet aircraft may be unreliable on Sanguine, so prop-driven planes are more advisable. There is then a shuttle service in from the Einwanderungplatz into the city of Sanguine itself, which brings visitors to the Kaiserplatz and other key locations in the city.

Sanguine is governed as a Reichsprotektorat, and is therefore covered under the same martial law provisions as the central shadows of the Outer Reich, with a Military Governor, Matthias Kapler. Kapler is also nominal general commanding all Reich troops on Sanguine. With respect to the rest of the Waffen-SS troops on the Outside, the general commanding is Cornlius Linz, Commander of the Waffen-SS (Außerhalb), although the day-to-day running of those forces falls to local officers on the individual military reservations. Each of the major population centres, including Neumünster, does elect a Kreistag, or district council, to deal with the problems in each city’s province of influence, with the smaller towns in each province also sending representatives to their district council. These councils then send representatives to Neumünster, to serve on the Reichsprotektor’s Advisory Council.

The Advisory Council comprises three representatives from Neumünster itself, three from each of the provinces (including Neumünster Province), and three from the military reservations, for a total of forty-two Advisory Councillors. Reichsprotektor Kapler doesn’t have to accept their advice or recommendations, but will usually only reject them in extreme circumstances.

The City of Neumünster

Neumünster is the largest city on Sanguine. The focus of the city is the Kaiserplatz, a huge, cobbled circular plaza containing high fountains, and surrounded by pillars on which large magical torches burn at night, illuminating the area. Around the plaza are the key buildings related to Sanguine’s government and administration – the Reichsprotektor’s palace (with the barracks for his small personal force) to the north, the Neumünster Financial Exchange, the Chancellery (where the Advisory Council meets and the Reichsprotektor has his official place of business), and the Sanguine judiciary buildings – plus the Princess Juliana, a five-star luxury hotel. A large statue of the Kaiser stands before the Reichsprotektor’s palace, facing towards the Victory Arch at the entrance to the Torweltgrünfläche, an extensive area of parkland to the south. Only official vehicles are allowed in the plaza: all other traffic must keep to the perimeter road outside the ring of the official buildings.

The rest of the city centre is split into quarters. Within a mile and a half radius of the Kaiserplatz, the city is built on a circular pattern, and is graced with impressive buildings and extensive parkland, with the whole Stadtzentrum surrounded by the Neumünster Innenkreiskanal, which is effectively a moat around the city centre. The Innenkreiskanal is fed via the Nordenversorgenkanal from the nearby River Acher, using a magically designed lock-system which periodically allows water into or out of the canal, as required, and drains through the Südenversorgenkanal into the River Sauer, which joins the Acher about two miles away to the south-east. The Innenkreiskanal can only be crossed one of eight bridges around its circumference. Beyond the canal, the city is still split into quarters, although the pattern of streets ceases to mirror the central circle, instead becoming a more regular block system.

The central amphitheatre, an important feature of any Reich city, is located in the Torweltgrünfläche, which is the focus of the southern quarter. The RFSS’s official residence, when he is staying on Sanguine, is one of the many high class houses and mansions which border the Torweltgrünfläche to the east, west and south. His specific property is in the north-east corner of the park, near to the Kaiserplatz. Beyond the canal, the rest of the quarter is primarily residential, except for the SS enclave.

The main ATS station is in the western quarter, as are the Cathedral of the Universal Church for Sanguine (St Kunigunde’s),and a variety of other civic buildings, including schools, the small Sanguine mage college, Neumünster University, the Lebensborn centre, the Neumünster Kreistag, police headquarters and the hospital. Within the Stadtzentrum, the western quarter is also the business district for the world of Sanguine and its trading links with the Reich and der Aussenhandel der Reichsverband, with the Aussenhandel embassies surrounding another area of parkland. The main railway station is just outside the ring formed by the Innenkreiskanal, and as you head further out from the centre, business premises give way to industry. This area is also the location for the Neumünster Heimat-Heer barracks.

The entertainment and shopping districts, including the museums, galleries, hotels, restaurants, theatres, the Von Bremen Arts Centre, the Great Hall (the largest hall in Neumünster for concerts, etc) and other similar buildings, are located in the northern quarter, with more residential property beyond the Innerkreiskanal.

Foreign embassies, permitted foreign religious institutions (most significantly the Church of the Dragon and the Church of Protection) and off-world trading concerns are located in the eastern quarter of the city, as are the offices for Reich concerns which are involved in commerce with the foreign organisations. There is also a second ATS station in this area, specifically serving off-world travel needs, and the whole quarter is interspersed with areas of parkland. The residences attached to the foreign concerns are towards the western edges of the Stadtzentrum, and on the other side of the Innenkreiskanal.

Transport around the city is primarily by tram, carriage, water bus, or local rail: although there are some cars, both magical and based on the internal combustion engine, these are mostly in government service. Inside the Innenkreiskanal, the railway is under ground, although beyond the canal it comes over ground and then joins into the local and national rail systems.

Like Murray, Sanguine has established trading and military links with a number of its adjacent Shadows. Unlike Murray, none of these have a tech level earlier than about 1800s, and they go much further up the future scale. One of these, HellerStern, is the headquarters of the Reich Space Navy.

Another is Germania, ruled by Kasimir Ritter. Germania is one of the major supply and logistics worlds for Sanguine. Artur Acker and Armand Becker both grew up in the Germania Lebensborn System.

Having been built at the same time, strong metaphysical links exist between Sanguine and its Sable counterpart, Murray. As a result, this has led to more commerce between the two than might have been expected, even before the Reich and Sable signed their Peace Treaty. Since early-RY107, Regent Emily and first Reichsprotektor Ludwig and later, his successor, have met once a month, alternating locations betwen Huntly and Neumünster, echoing the regular meetings between King Robert, Kaiser Wilhelm and RFSS Delatz.