Sanguine is ruled as an SS Protectorate, and therefore the senior personnel on the world were historically serving SS officers. The first Reichsprotektor of Sanguine was Marius Ludwig, KSS. He was succeeded by the current holder of the position, Matthias Kapler, in RY136. At this time, the Sanguine Council comprises four members from the SS, one from the Wehrmacht (in a break with tradition), along with Divine Emissary Silke von Halle, an Honorary officer who also serves as the Priestess of the Summer Circle, and RFSS Delatz. They are listed here in order of precedence within Sanguine. 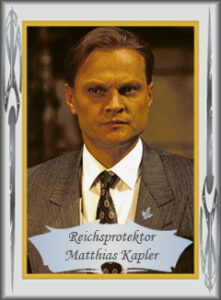 Matthias Kapler is Lebensborn, and joined the SS immediately after doing his State Service with the standard military. He later studied magic at the SS-Schule Haus on release from his military duties, and is registered as being a specialist in offensive and defensive magic. He is also believed to be a ritual magician, although how accomplished is uncertain.

Over the years, he worked his way up through the ranks of the Waffen-SS, and even spent about ten years (RY123-133) on detached duty for the RFSS on a Reich-allied world, developing its military into a formidable force and training the officers to run it once he returned to the Reich. He was made a Knight of the SS a couple of years later, in June RY136, shortly after taking up his current position.

During his time with the Waffen-SS, he gained a reputation as a hard, efficient, honourable soldier. Moreover, he is a highly decorated officer, who was given the Niedriger Adel title of Freiherr von Müritz by the Kaiser in RY148 for services rendered. Most recently, he received the accolade of Knight of the Iron Cross for services to the Reich.

Kapler stands about 6’2″ tall, and is solidly built. When off duty, he is an accomplished musician, and is an especially skilled pianist. He also enjoys mountaineering, hiking and skiing. He married Isabell, the younger sister of the Fürst von Wolfsburg, in late-RY122, which caused something of a stir at the time, as Kapler was not acknowledged as being of noble birth. Isabelle was nearly disowned by her family, before intervention from the Imperial Council meant that they merely asked her not to darken their door again. Their time away shortly thereafter, put many of these problems to rest. Their relationship remains strong, and they have two children: a daughter, Lili (b.RY136), who is in her final year at Berlin Mage College; and a son, Rudolf (b.RY142), who is finishing his high school education but is already a talented artist.

Matthias and Isabell are very close friends of Annifrid Ragnarsian, and helped her navigate the Reich when she moved there to be in RY133.

Von Raeder, head of the Ausland-SD (Außerhalb), is one of the Reich High Nobility titleholders. His father was career Wehrmacht, finally retiring at the rank of Generalmajor in the Heimat-Heer, while his mother was Lebensborn. This unusual paring was authorised by the Imperial Council. When he was born, he was named Georg by his father, and that is still the name on his Reich Writ of Birth, but following a long history of mispronounciation, he is now usually called Jorge, even by himself.

Von Raeder was brought up on the family estates and despite having been discovered as Talented at school, opted to follow the family tradition and do his State Service in the military at eighteen, before undertaking any further education. He served with the Wehrmacht for five years, and then went to the Armed Forces Mage College, where he excelled and was noted for great things. He passed his Bachelors very quickly, and then chose to re-enlist in the Reich armed forces, this time breaking with family tradition to become a member of the Waffen-SS.

He studied for both his Masters and Doctorate on release from his military duties, including picking up the basics in the magical disciplines not covered in his original course, and is now one of the best defensive mages in the Reich. On active service he specialised in small unit and covert operations, before being trained as an independent operator working in a variety of geographies. He is a highly decorated officer, holding the Order of the Red Eagle from the Kaiser. He spent a while on the personal staff of the RFSS, undertaking a period of detached duty in the Empire of Eboracum, as a Priest of Protection (an honour he still holds). He was recalled to active duty within the Fatherland in May RY150 at the rank of Obergruppenführer, when he was appointed Head of Ausland-SD (Außerhalb). He was promoted to Oberstgruppenführer and made a Knight of the SS Summer Circle in June RY154.

Ausland-SD (Außerhalb), is technically a branch of the Main SD, but given that the organisation is based in Sanguine, rather than the Inside, it has greater autonomy from the main SD and the RSHA as a whole than the Innerhalb branch. Von Raeder is the next-highest ranked officer on the gateway world behind the Reichsprotektor.

Despite being a serving officer, most of the time Jorge wears civilian clothes (except for formal Sanguine Council meetings), with an SS rank pin worn in his lapel. Part of this is believed to be because he is married to Princess Elanor of Sable and Murray, and he doesn’t want to annoy his in-laws too much.

Like so many of the SS hierarchy, Cornelius and his twin brother Josef are Lebensborn. He is Talented and joined the SS at eighteen, as soon as he left school, rather than bother with State Service. He did officer training at Bad Tölz and studied magic at the SS-Schule Haus. After gaining his Bachelors in magic, he spent a brief while within the SD, but eventually requested a military assignment and transferred to the Waffen-SS in RY110. In later years he returned to the Schule Haus and furthered his magical education.

He is a highly professional career officer, specialising in fast, mobile attacking tactics, both with cavalry and mechanised units, as well as being an expert at combat magic.  He has a good working relationship with the other members of the Sanguine Council, along with Joachim Peiper and Matthias Kapler. He was honoured as one of the Summer Circle Knights of the SS with the establishment of that group, along with his brother Josef.

Max Hauer has been head of the Sanguine RSHA, in charge of policing and security on Sanguine and in its trading Shadows since he was transferred from the Inside in May 154, where he had previously been Head of Amt. 5 .

He was born in the Bremen Lebensborn Centre in July RY072, and did his State Service with the Wehrmacht. He is Talented, and studied for his Bachelors at the Bremen Mage College. He showed a flair for investigation, and joined the Orpo as a young officer in SY095, shortly after graduating from Mage College. He quickly showed his skill in the area, and was moved to the Kripo in SY100. About five years later, he was invited to continue his magical studies at the SS-Schule Haus, where he specialised in Investigative and Communications Magics. After completing his Doctorate, he joined the Gestapo, rising to become its head in RY132. He was made a Knight of the Summer Circle in June RY135.

Standartenführer Wolf Ulrich, son of Ian of Amber, is the head of the Sanguine Kripo, reporting to Obergruppenführer Hauer.

Of the various high-ranked military personnel based in and around Sanguine, Markus von Klaus is the only one whose commission is from the Wehrmacht, not the SS. When the idea of a Reich Space Navy was proposed, to be based on the Outside when it became apparent that space was becoming a common theatre of war there, the Reich Staff Council decreed that it should be part of the regular armed forces, not the SS.

Von Klaus is the brother of the Fürst von Dresden. Much of the time, he is based on the extremely high-tech world of HellerStern, although he does co-ordinate with both Kapler and von Raeder on a regular basis. Despite his rank equivalence to the RFSS, von Klaus is only fifth in the Sanguine hierarchy.

Silke von Halle was formerly a member of the Reichs-SS. She was born at the Berlin Lebensborn Centre in October RY078, and is believed to be the daughter of Tristan Heydrich. She spent a while with the SD, before moving over to work with the Ahnenerbe, where she developed considerable expertise in matters arcane and occult.

She is the only Knight of the SS to have ever moved from the Winter Circle to the Summer Circle, which coincided with her stepping down as the Lebensborn Keeper of the Lineage and becoming a Priestess of Protection. She represents the interests of the God of Protection on the Outside, but she still the Honorary rank of Obergruppenführer. She has been married to Forstapo Chief Dominik Gerlinde since December SY123, and they have three children: twin sons, Michel and Markus, born in RY127 and a daughter, Antonia, born RY135.  All three are Talented. Michel is currently serving with the Waffen-SS, Markus is a Priest of Protetion, and Antonia just started non-military State Service. Dominik is a relatively frequent visitor to Sanguine, and Silke also travels Inside regularly.

Kasimir Ritter has been one of the RFSS’s key agents on the Outside for many years. When the Sanguine group was being established, the RFSS proposed giving Ritter control of one of key support worlds for the new Gateway, and the latter accepted wholeheartedly. He promptly renamed it Germania. The RFSS was less impressed when Ritter decided to style himself as Führer for two reasons: first, because while he was lord of all he surveyed on his own world of Germania, he was still reporting to the Sanguine authorities; and second, because the title Führer has never been used within the Reich and its lands. Given that Ritter has proven very efficient in his assigned task, as well as working for Reich interests in other areas of Sanguine Shadow, at this point he has been given a pass.

Ritter is not a full member of the Sanguine Council, but given his world’s importance to the whole he often attends meetings as a non-voting consultant. His second-in-command on Germania is his RFSS, Karl Heydrich, grandfather of Reich CSSD Tristan Heydrich.