Murray is ruled as a Constitutional Regency: the government governs, and the Regent oversees and makes sure that the interests of the King of Sable, from whom she holds her position, are represented.

The two continents and Rothiemay Island are split into regional constituencies which elect councillors who sit in the regional councils in the major population centres. Those local councils elect representatives from their number, who then go to Huntly, to sit in the National Parliament, which meets at Government House and comprises about 400 people. The Prime Minister is selected from the largest party in power: the current incumbent is Jonathan Wheeler, of the Tory Party.

A mechanism of emergency powers does exist allowing the Regent to suspend democratic rule temporarily at times of high threat or disaster, but these have only ever been invoked once, in the SY130s, when Murray was in the direct path of a major Shadow storm. 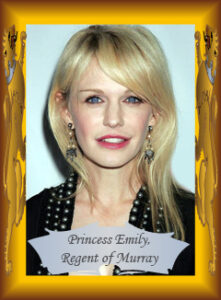 Born in Sable in April SY030, Emily has always been something of an enigma. For a long time, she was one of the younger members of the family, having been born after most of her nephews and nieces, and therefore kept very much to herself when she was a child. She studied at SMC, earning her Bachelor’s in SY053. Following her graduation, she attended Sandhurst and served in the Sable Army for about fifteen years, ending her tenure in the Logistics Corp, and with the rank of Major. After she resigned her commission, she returned to mage school, gaining her Doctorate in SY073 and specialising in Combat and Defensive magics. She then spent some years with the Sable Diplomatic Service, working directly for Marcus Court, as well as undertaking personal missions for her father, King Robert.

Given her knowledge of politics and diplomacy, her military experience and a natural of a flair for administration, she was Robert’s first choice to become the new Regent of Murray after her nephew, Prince James, was recalled in late-SY106.

She is smart, funny and very capable of turning on the charm at the drop of a hat. Since she became Regent, and later helped her father protect Murray when it was hit by a major Shadow storm in the SY130s, it has become apparent that she is one of the best wielders of the Royal Power.

It is not entirely clear where or when Emily first met Daniel Everard, save that it was on the Inside at some point when the doors between Sable and the outside world were generally closed, and before the building of Murray. The most popular theory is that they met was while she was on one of the ad hoc diplomatic missions she used to undertake for her father. It is equally uncertain who he actually is, beyond the fact that when they met, he was a serving officer in the Wehrmacht with the rank of Oberstleutnant, and that he wears the signet of a Reich Doctor of Magic.

When she was appointed Regent of Murray, however, she informed her father that she and Daniel were married, and had been for some years. He resigned his Wehrmacht commission around the same time, and they moved to the gateway world together. They’ve always made a good team, balancing her skill with people and abilities with the Royal Power, with his obvious competence in matters military. While she was pregnant with the twins, Elanor and Edmund, Daniel took on more of the day-to-day duties of ruling Murray, although as soon as she was ready to return after her maternity leave, he had no hesitation handing back the reins.

His Reich origins would appear to go a long way towards explaining why Princess Emily never had any objections to her daughter marrying the Graf von Klieburg.

It has been posited that Daniel may, in fact, be the same individual as one Daan Evert, who was born in the Berlin Lebensborn Centre in RY044, where he was recorded as the son of Tristan Heydrich. This has never been confirmed.

Elanor is a boisterous young woman, who is a very sociable creature, and enjoys a challenge. She was born on Murray in January SY124, a few minutes before her brother Edmund, and was a regular visitor to Sable from early on. She became very well known around the City, and attended SMC from SY142-147. She gained her Bachelor’s degree, after which she split her time between Sable and Murray.

Rather to the surprise of many in both Sable and Murray, and the disapproval of some, she married a Reich nobleman, Jorge von Raeder, Graf von Klieburg, at the beginning of August SY149. For the most part, however, this was cautiously accepted as a marriage for love, and a bridge between the two nations. Having spent some time away, much of it in Aurellis, they returned in March SY150 with twins, Emma Louise and Wilhelm Robrecht, who were aged five at the time. Their younger son, Dieter Maximilian, was born on 21 December SY150.

The situation became more difficult when Jorge was returned to active duty with the RSHA, a bare three months after they returned from Aurellis, at the behest of RFSS Delatz. He was subsequently appointed Head of the Außlands-SD (Außerhalb) in June SY150, based in Sanguine. This resulted in murmurs in certain quarters that perhaps Her Highness should get a civilised divorce. Partly in reaction to this, while Jorge settled into his new posting, Elanor undertook officer training at Sandhurst, graduating in June SY151. She swore her Oath of Loyalty to King Robert, and then served the required five years in the Sable Army. During this time, the children lived primarily with their father.

Her term of service came to an end in early-October SY156. Since then, Elanor and her family have split their time between Sanguine, Murray, and her husband’s estate in Klieburg, although she does bring her children to visit Sable on a regular basis.

Edmund was born a few minutes after his sister Elanor. He is Talented, but delayed going to SMC for some years, instead choosing to travel in the Murray Shadows to find his niche, and do occasional jobs for his grandfather. He finally went to SMC in September SY148, and graduated in SY153. Since then he has been back on Murray, working with his parents and travelling various worlds on the Outside. Brother and sister get on reasonably well, although they don’t spend as much time in each others’ company as they used to. He has occasionally visited her and her family on Sanguine, rather to the dismay of his Sable Guard detachment.

He is a keen sportsman, especially rugby and cricket, and has represented both Murray and Sable at international sports tournaments.

While Emily’s nephew, Prince Thomas, is not officially part of the Regnal Line of Murray, he has become a welcome guest there since the death of his wife, Odessa. He has been assigned permanent quarters in Huntly Palace, and is present about a third of the time. When he’s in town, he consults on legal matters for the Regent and has been appointed Attorney General of Murray.

Thomas is the middle of Andrew and Regan’s male triplets, although he is slightly shorter than Adam and is more lightly built. He followed his father into the practice of law after graduating from SMC and gained a strong reputation as a trial lawyer. For some years, he was attached to the Attorney General’s office, working closely with Julian Castle, and enjoyed pulling rank occasionally to stand as prosecutor in criminal cases. He had been tipped to succeed Castle as Sable’s Attorney General, but in April SY154, he inexplicably resigned his position.

Thomas is rumoured to be one of the strongest of the Royal grandchildren in matters arcane, has studied a variety of subjects in his time, and is a well-known exhibiting artist. However, when he plays, he plays hard. In his youth he was described as a paternity suit waiting to happen, but thus far, no-one has taken him to court.

Rather to the surprise of both his siblings and his father,  Thomas married the Hon. Odessa St John in a small private ceremony in May SY154. Sadly, he was widowed in SY159 and Thomas is now rarely seen in Sable. His relationship with Andrew is more subdued than that enjoyed by many of his siblings, despite the fact that of his kin, he is the one who has most closely followed his father’s original career.

Outside of work, he keeps very much to himself. He’s certainly showed no sign of returning to his womanising ways of before he married.

Prince Gwillym, Divine Emissary of the Church of Enquiry

Emily’s nephew, Prince Gwillym, is not officially part of the Regnal Line of Murray, but is considered part of the family in all other respects. He is the elder of a pair of twins, born to Andrew and Regan more than twenty-five years after Prince Thomas and his siblings. When he was younger, he spent a lot of time with Queen Claire, who is said to have taught him some of her more unusual abilities. He is Talented, but quite weakly, and initially only ever did his Bachelor’s at SMC. He also attended Sable University where he studied maths and chemistry/alchemy.

He was appointed as Divine Emissary of Enquiry by his grandfather in SY106, at which point he moved to Murray, where he lives in quarters within the External Temple of Enquiry. He finally took his Master’s after his appointment as Divine Emissary, since when his abilities with Investigative magic have skyrocketed.

Gwillym is more circumspect than his twin sister Cerian, to whom he is devoted, and is rather more quiet and studious, although he has worked with the more military minded of his kin. When on vacation, he is something of a wanderer.

“CC”, Divine Emissary of the Church of Communications

Michael most definitely has a Divine Emissary on the Outside, who is based on Murray, but that’s about as far as ‘definite’ goes. All that is known about them, is that they go by the name of CC; they are believed to have quarters in the External Temple of Communications; and they may not be entirely human. They also may have come into being around the same time that Elementis was Created, but that’s even less definite than everything else about them.