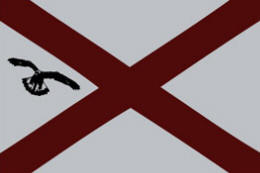 The overall tech level is equivalent to the mid-1980s, and it has both the internal combustion engine and the jet engine. However, as the industry is based on magi-tech, the level of pollution in the cities is considerably less than it would be in the equivalent size cities on twentieth-first century Earth. The high ambient magic level and the nature of Sable’s magic, which Murray shares, mean that much of the industry and technology here are also magically powered.

Murray has good infrastructure (buildings, roads, railways, sewers, etc), and there is a telephone system which works on more traditional industrial lines.

With respect to weaponry, gunpowder ignites, and basic TNT/dynamite combust, but none any of the more modern explosives work. Firearms are limited to revolvers, shotguns and bolt-action rifles: automatic and semi-automatic weaponry are non-functional. Nuclear power and weapons do not work at all in Murray and its Trading Shadows.

The currency is the Murray Pound, which has a 1/1 relationship with its Sable equivalent, and there is a fairly stable relationship of £1 to RM2. Both Sable and Murray Pounds are accepted legal tender within Murray. Private purchases are usually made by cash or cheque, and the majority of indimany individuals and families have bank accounts. There is also an inter-bank system of money transfers for larger and commercial transactions.

Like Sable, Murray is a partial adopter of the Aurellis ID system. ID bracelets are obligatory for serving members of the Armed Forces and the Security Forces when on duty, and it is preferred (but not required) that such people wear these off duty. They are also required for members of the Murray Government, Civil Service and Diplomatic Service, while in the office or out on government business. The option to have an ID bracelet is available to everyone else in Murray and its Trading Shadows on a voluntary basis, as it is a quick and convenient means of ID. Murray-issued ID bracelets are also compatible with the systems in Sable, the Reich and Aurellis, but unlike Aurellis and Reich ones, Murray ID bracelets can be removed if wished.

The age of majority in Murray is 18.

Standards of Living and Life Expectancies

Socially, the attitudes of the people are also akin to those of the 1980s, having moved forwards considerably under the reign of Regent Emily.

The standard of living is comfortable to high  and there is a mixture of agricultural and industrial economies. It has clean and relatively safe streets (in part due to a standing police force), running water and sewers and good air quality (to the main heat source for steam being magical, not fossil fuels). Employment is at around 95%. There is some poverty, but it is minimised as far as these things can be. As long as there is a willingness to work, welfare provision is decent; and there is a national public health service and hospital network for primary, non-specialist and dental care, as well as magical healers who can deal with more serious problems for a small fee which is subsidised by the government.

Life expectancies in Murray and across the Trading Shadows fall somewhere between Sable and the Commonwealth, at two to two-and a half  times the human norm, with individuals commonly reaching ages of 150-200 years, and sometimes longer. The usual ages of retirement are 125 for men and women in public service, and 150 for employees of private concerns, although these are not set in stone. Of course, because people live longer, generations of families are also wider – at closer to 30-35 years than the standard 25, and because of magic and other matters, women have been known to have children up to their first century.

There are fewer shapeshifters within the Murray population than there are in Sable, itself, with roughtly 5% of the popultion having the genetic marker which, if activated, could allow them to become a shapeshifter. Of these, in approximately 1 in 10 (0.5% of the population) the gene is active to the extent that they will rarely get sick, they will heal quickly from injury and they can survive wounds which would kill a normal person. Within that band, 1 in 10 again (0.05% of the population) have some measure of active control.

Literacy within Murray is around 96-97%. As in Sable, there is a comprehensive state education system which is free and available for all children up to the age of 18, although they can leave at 16 if they wish to go into an apprenticeship. Public examinations are usually held at 16 (‘Ordinary’ level qualifications) and 18 (‘Advanced’ level qualifications), although particularly gifted students may be able to take these early. There is also a parallel private school system for those who would prefer it for their children, either because they believe that private education is better than the public system, or they feel that the ‘Old School Tie’ is important for the future, or because they want their children to go to a religious school denominated to a faith other than the Church of Sable. The academic year runs from early-September to mid-July.

Huntly City is home to the University of Murray, which also has a number of other campuses on both continents, in most towns and cities with a population of over 30,000 people. About 15% of Murray teenagers go to university, usually at 18 or 19, although there is the potential to go up early in exceptional cases. A further 20-25% of teenagers will undertake some other form of vocational higher education, often at local colleges or occasionally on day release to the smaller university campuses. Non-magical undergraduate university courses are of three to five years, depending on the subjects studied, with graduate courses (Masters, Doctorate) ranging between one and three years.

There is a single Mage College on Murray, which is also based in Huntly City.

The Church of Sable is the state religion of Murray, although attendance is only c.30% attend on a semi-regular basis, with another twenty percent observing the major festivals. It is a monotheistic religion founded on Judeo-Christian principles, but is a strange mixture of the Church of England and some of the older Protestant faiths in beliefs and attitude. The Archbishop of Murray is Briana Sheedy, a Murray native. Her Seat is at St. Gabriel’s Cathedral in the Huntly Old City. Almost all cities, towns and villages on Murray will have at least one Church of Sable church.

While the Church of Sable is the state religion of Murray, religious freedom does exist within the Kingdom. The second largest faith is the Church of Vicenza, an organisation with similar beliefs, but very different rubric and ceremony. The Church’s Bishop in Murray is Ariano Arrigucci, who was sent to Murray about nine years ago. His Seat is at the Cathedral of St Peter in Greater Huntley. Most of the major towns and cities on Murray will have at least one Church of Vicenza church, although they are fewer and further between in the smaller towns and villages.

As well as the two Cathedrals, there are a number of other places of worship within the City of Huntly.

Policing in Murray is split across three Forces: one for each of the two continents, and one based on Rothiemay Island. With respect to the two continental forces, operations in each town and city are run by their own branch hierarchies, each reporting to a local Police Commissioner, who in turn reports to Headquarters. Officers from one city will need to check in with the central police station of another city he may need to visit, to establish his credentials.The Hearadh Police Force is headquartered Cromarty and the Belenus Police force is based in Newburgh.

The Rothiemay Police Force is based in Greater Huntly, and has a single hierarchy with jurisdiction across the island.

Each Force has its own Commissioner, and is split into two divisions:

These forces deals with general policing within the Kingdom of Sable, and occasionally co-ordinates with the security forces and the Royal Guard in matters of State and diplomatic security.

In addition, when criminals undertake cross-jurisdictional offences, the Serious and Organised Crime Command can be called in, which has wide-ranging powers to assist its operations across multiple forces in multiple cities. The SOCC is based in Huntly City, but has couriers and Pilots at its disposal which mean that it can get to anywhere its needed on Murray in a very short space of time.

Being somewhat further up the tech scale than Sable, Murray has both audio and video broadcasting systems, using crystals and communications magics, with some technological equipment thrown in. Crystal broadcasting involves a central station transmitting on set frequencies. Receivers can be purchased across Murray, and at the flick of switch, the channel being received is magically changed. Receiving crystals are tuned to receive broadcasts from the four radio stations in Murray City – which specialise in News and Current Affairs, Light Entertainment, classical music, and jazz and folk music – and the two video-based stations. The stations are nominally State run, à la the BBC, but there is little government control of what can be broadcast

Recorded audio and visual entertainment is also available, in the form of both rented sound and illusion crystals; and programmes on magnetic tape. Magical reproductions of plays, performances, etc are rendered in 3D. Tape technology is yet to catch up with this, but has the advantage of being cheaper to buy.

There are three main newspapers commonly available in Murray and across the Trading Shadows, plus a number of local publications. In addition, the Sable papers are available in larger towns and cities. Freedom of the press is enshrined in Murray Law, although a Thirty-Year Rule applies to the release of sensitive information, and the government also reserves the right to apply a D-Notice in certain circumstances, which restricts reporting on a specific subject while the Notice is in force.

Published daily in broadsheet format, this publication is known for good, unbiased reporting of affairs across the Murray and its Trading Shadows. It also reports from both Sanguine and Seconde, and has offices on St. James and Casablanca (the two other Inside-Outside gateway worlds). Its reporting is well-respected.

Published weekdays in tabloid format, and with a slightly left-wing bias, the Record is largely Murray focused, although it does have offices in the main Trading Shadows as well as Sanguine and Second. Despite its slight bias, for the most part, it’s reporting is considered intelligent and reliable.

Published daily in tabloid format, this tends towards sensationalist journalism rather than unbiased reporting of the news. While some of the writing is relatively intelligent, it has a tendency of trying to appeal to the lowest common denominator in the newsreading public.