The Caldera and Sable City 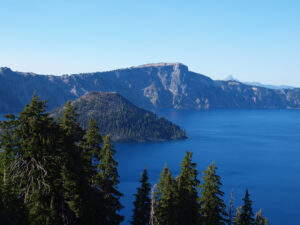 The caldera is a six mile in diameter crater set towards the centre of the Sable plateau, sloping sharply on three sides, but with a much more gentle slope to the south face, on which much of Sable City is built. The lake within the crater, with water so deep as to always be blue, makes the area particularly impressive. The crater is honeycombed with old lava tubes: there is even a large cave mouth not too far along the ridge from Sable City. For some reason, it always has members of the Royal Guard posted on it, although people who have been inside just report that there is a maze of passages there.

Sable City skirts the caldera, especially down the southern slopes of the volcano, where the gradient is sufficiently gentle that building is practical. It is known as a centre of learning, both magical and mundane, and culture. The city is mainly built of white stone, in stark contrast to the grey of the volcanic rock, which is still visible in places. Most of the buildings are only two to three storeys high, outside of the town centre, and three to five in the the central area. There are also some buildings with tall spires and towers, including Saint Michael’s Cathedral, seat of the Archbishop of Sable; Saint Peter’s Cathedral, seat of the Church of Vincenza in Sable; and Sable Mage College.

Note: These pictures are quite large when clicked on

There is trade to the caldera, aided by the mages and the Sable Guild of Pilots, both from the rest of Magica Superior and also from the Shadows surrounding the Sable Shadow. This mainly comes up the Sable River, which seems to have resisted falling under Reich control, although some trade does come in via rail and road and Pilot. The circle of trading Shadows is known as the Commonwealth.

At the point the Sable River crosses the Shadow boundaries as it leaves the Kingdom of Sable, there is a ocean-facing port city, known as Riversend. The actual location of Riversend is unclear from the point of view of Magica Superior, but its purpose is as the main gateway out into the Commonwealth, and all the trading paths – both land and sea- which lead to Sable terminate here. A railway station and cargo terminal has recently been established here. The railway then follows the route of the Sable River up to the city itself. This has proved popular for both cargo and passengers, as it reduces the time taken to get from the port to the city.

The naval base is commanded by Rear-Admiral Jansen Caldwell, a career naval officer; while the land forces are under the command of Brigadier Marion Collins, daughter of Aldous Collins, Duke of Farview, who has a reputation as a combat mage, as well as a competent leader of men.

Slightly to the southern side of the lake is the King’s Isle. It is reached by a light bridge from the rim of the caldera, and the bridge can be turned off for security. The island is about a mile in diameter, and reaches a double peak on the east side, the higher about 700 feet above the level of the rest of the island, and the lower about 300 feet up. The light bridge lands at the top of the smaller peak, and a set of stairs leads down to the King’s Palace, on a more level area of ground about 100 feet above water level.

There are two other staircases. One leads to the summit of the higher peak…and from there it is possible to climb to the air realm, Argent. The other leads down the slope to the beach of the island, where there is a small jetty. If you walk around to the very northern tip of the island, a cairn marks the steps heading down to the water realm, Azure.

The King’s Palace is set in extensive gardens, which include formal areas, a rose garden and a hedge maze. The palace itself is designed after a European villa…three storeys, centred around a large courtyard with a fountain and pool, and lawns edged with box hedges in the centre. The palace is of white stone, roofed in red, and inside it feels pleasantly cool and airy. The formal receiving areas are in the east wing, facing the staircase from the bridge. There is a throne room, and a number of state rooms, including a formal dining room and a great ballroom. The rooms are well appointed, with painted walls and ceilings, set off with gilt.