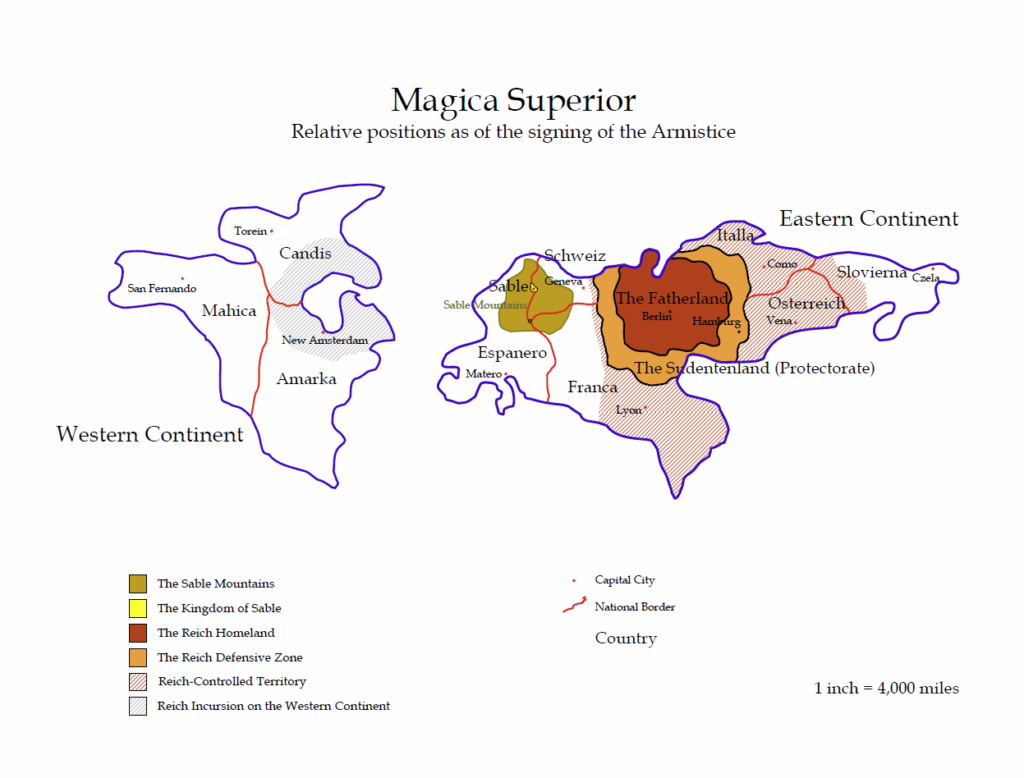 Magica Superior at the time of the signing of the Sable-Reich Treaty, in SY 154

The Kingdom of Sable is located on the Primary Realm in the Middle Lands of the Terra Magica/Luxor system – equivalent to Amber in a more standard ADRPG-based game. It is believed that the whole world was originally also known as “Sable”, rather than just the area now within the borders of the Kingdom. However, as the Reich gained dominance, they chose a name more to their liking, and the world is now usually referred to as Magica Superior. Magica Superior is a roughly spherical planet with a single moon. The Northern Hemisphere is split into two continents, separated by 2,000 miles of water. The Eastern Continent is roughly the size of Europe and Russia, while the Western Continent is equivalent to Northern America, including Canada and Alaska. The Southern Hemisphere has little land, most of it chains of ininhabited volcanic islands. There is a southern polar continent, but it has pretty much been left to the wildlife, with the only visitors being the occasional scientific or anthropological missions.

The Eastern Continent is the home of the Reich, which has its capital in Berlin, roughly in the centre of the land mass. The Fatherland is surrounded by a protective zone, known as the Sudetenland. The Reich is by far the dominant power on the continent, although the Kingdom of Sable is protected from its advances by the disputed territories of Schweiz and Franca, and the Sable Mountains.

The Sable Mountains are a range approximately 2,500 x 3,000 miles in area, reaching over 20,000ft at the peaks: the highest point is Mount Anglia (referred to as Mount Vanaheim in the Reich), at 20,320ft. The treeline is at roughly 2,000ft. However, it is remarkably difficult to try to get into the mountains from the rest of Magica Superior, and interlopers usually find themselves going back the way they came, although on the bright side there doesn’t appear to be a problem with altitude sickness in the mountains up to about 10,000ft. Within the mountains there is a central plateau approximately 375 miles by 275 miles averaging 5,000ft above sea level, with a number of rivers crossing the plateau. Of these, only the Sable River flows out of the mountains (from a source about 200 miles into the mountains at about 7,000ft) and along the full length of the plateau, before exiting through a gorge in the mountains to the north towards Riversend. In the centre of the plateau, an extinct volcano with a lake in the caldera rises (surprisingly gradually for a volcano on its southern slope, though more steeply on the other faces) to about 1,000ft above the surrounding area, making it the highest point on the plateau.

The Western Continent is weaker, immersed in both internal wars among the three countries there, and hostilities with the Reich. The Reich has achieved a foothold in the West, but still has to take full control. However, in the meantime it wages a bloody campaign of conquest, helping its own cause by having Reich agents foment the struggles between the three countries, to make sure they never ally against the Fatherland. In the final run-up to the signing of the Peace Treaty, Sable managed to push the Reich forces back to some degree in Franca, on the Eastern Continent, but the Reich pushed out Eastwards and also managed to take firm control of more territory on the Western Continent.

There is something of an oddity regarding time zones on the Eastern Continent: despite geographical distance and the fact that the world is spherical, Sable and the Reich share a time zone, although Espanero is one hour behind Sable, the Western continent is between six and ten hours behind, and the countries to the east of the Sudentenland are forward of the Reich.

The Kingdom of Sable 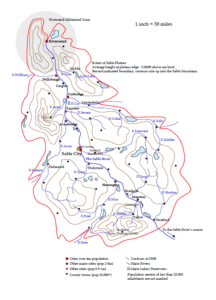 The Kingdom of Sable (total population 40m) is located to the north-west of the Eastern Continent of the Shadow, on the central plateau of the Sable Mountains. While small compared to the continent on which it is located – at roughly the area of the United Kingdom – it is the seat of power for a cross-Shadow Empire that is almost three times larger than that of the Reich. Despite its location and altitude, the Kingdom of Sable is surprisingly temperate, with limited snowfall compared with the high peaks surrounding the plateau, and the plateau itself is criss-crossed with rivers and rolling hills. Sable City (population 4.5m) is built on the southern slope of the extinct volcano at the heart of the plateau. The Sable River enters the Kingdom from the mountains roughly 125 miles south-east of Sable City, via the Mountain Falls, which drops almost 500ft. 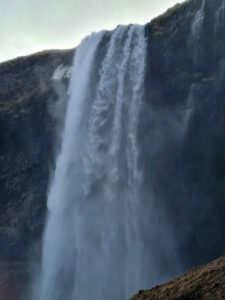 The second largest population centre is Riversend (pop. 4m), where the Sable River leaves the boundaries of the Kingdom, about 175 miles north of Sable City. It is something of an oddity, however, as it located around a coastal harbour, and yet geographically it should still be within the Sable Mountains. Due to its importance to the economy of Sable, there is a significant military presence in Riversend and the 50 mile radius surrounding it (the Riversend Militarised Zone), with a full naval base and shipyard, as well as ground forces.

There are five other main industrial cities with populations of over 2m: Avonbridge, Corbridge, Harrington, Manston and Willsburgh, located on or near the Sable River. In addition, elsewhere on the plateau are another six cities with populations of between 0.5m and 1m souls. Apart from the cities, linked by a mixture of road, rail and some river and canal communications, are numerous other towns and villages, many of which are involved in farming and agriculture. The currency is the Sable Pound, aka the Pound Sterling, which has a fixed exchange rate of 1:2 with the Reichsmark.

Sable is governed as a Constitutional Monarchy, with King Robert happy to leave the day-to-day running of the City State to its elected government, except in times of dire emergency (of which there have been pleasently few during his reign).