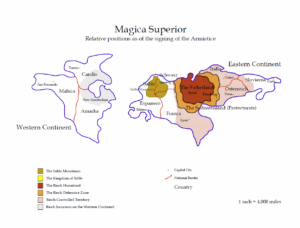 Magica Superior at the time of the signing of the Sable-Reich Treaty, in SY 154

The Reich is located on the Primary Realm in the Middle Lands of the Terra Magica/Luxor system – equivalent to Amber in a more standard ADRPG-based game. The Fatherland calls this world Magica Superior, and is located on the Eastern Continent of the Northern Hemisphere. Whereas the Kingdom of Sable itself has the aspect of 1920s England, the Reich is akin to Nazi Germany.For further information on Magica Superior, click here. 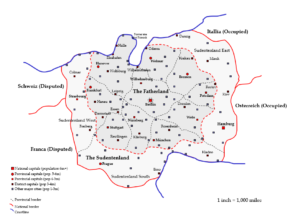 The Fatherland is a huge country, more than 4,000 miles across, surrounded by a protective zone, known as the Sudetenland (population 200m), which effectively extends its borders by another 1,000 miles or thereabouts to both the east and the west. Beyond that, again, the Reich has conquered large swathes of territory in the neighbouring countries, and is fighting over much of the rest of the continent, with the exception of the Sable mountains, which are inaccessible to them.

The country is sufficiently large that it is split into ten Provinces, all of which also have their own regional capitals and councils (see Politics). The Sudetenland defensive zone is itself administered in three Military Governerships (East, South and West), and has its own capital at Hamburg (pop. 6m).

The Reich capital (the Reichshauptstadt) is Berlin (pop. 10m), roughly in the centre of the Fatherland. 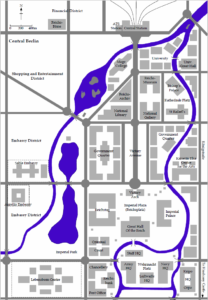 Berlin is located near the centre of the Reich, on the Rivers Spree, which rises in the high country about two-hundred miles south of the Capital and passes through Berlin on its way to the sea, and the smaller Saale which rises to the west, but has its confluence with the Spree close to the Central Railway Station. The two rivers act as a “moat” for three sides of the Central Berlin Administrative District.

The administrative area was built very much on the ideas that Albert Speer had for the Berlin of St. James, on the Outside, with the added bonus that the Berlin of the Reich is not built on a swamp. As a result, Central Berlin is a place of straight lines and large-scale architecture. 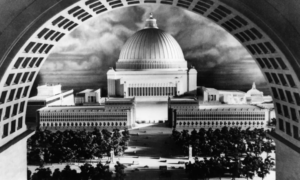 The Great Hall of the Reich from the Victory Arch

The main government areas are centred around Siegesstraße (Victory Avenue), thus named from the very earliest days of the Reich. This is a wide boulevard which travels from the Central Railway Station (and its later addition, the Berlin ATS station) to the Victory Arch. Passing beneath the Arch brings you into the Reichsplatz (Imperial Plaza), which is dominated by the Great Hall of the Reich.

Other major buildings such as the Central Court, the Chancellory and the Post Office are also situated between the rivers as the space between them widens. Crossing the Saarle behind the Great Hall leads to Wehrmacht Plaza, which is moated on all four sides. Hradcany Castle, the headquarters of the RSHA is about a mile to the south, situated on a small hill with commanding views of the city.

Transport Around the Reich

Within the major cities of the Reich, there is always an extensive public transport network, comprising local electric railways, both overground and underground, and trams powered from overhead electrical lines. These have been made possible by the developments in power transmission that have been made in the last thirty years. Lorries for deliveries are usually steam-driven, as are the majority of private vehicles. There are magically-powered cars on the roads, although the vast majority of these are owned by Reich officials, the armed forces, and the powerful industrialists and landowners who support the regime.

In the smaller cities and towns, public transport is usually via steam-omnibus, or in some cases, steam-powered trams, although some also have local steam-powered rail networks. Delivery vehicles comprise both steam-lorries, and horses and drays, with the latter more common in more rural areas. The primary methods of private transport outside the towns are horses/horse-drawn and steam-powered vehicles.

For public transport between population centres across Magica Superior, there is an extensive railway network on both the Eastern and Western Continents. In the Reich and the Sudentenland, plus the Reich-dominated and disputed territories surrounding them, this network is state controlled (and yes, it does run on time). In the non-Reich territories on the Eastern Continent there are privately-owned railways, and on the Western Continent, private railways predominate, in keeping with the capitalist ethics driving the three Western countries.

Reich military vehicles are produced centrally. Vehicles for private individuals are produced to order by Mahler Arbeitsgemeinschaft, under the Mercedes marque, and are mainly affordable by the very highest echelons of the Reich: the Imperial Family, the Party Chairman, the Reichsführer-SS and other such notables.

In March RY104, the Reich was also connected to the Aurellis Transportation System, thus improving travel across the Reich substantially, for those who can afford it. Initially, all Reich Pilots came from within the Forstapo, which was also responsibile for regulation of the system. As time has passed, and attitudes have changed somewhat, the pool of Pilots has widened – albeit the majority still come from within the Lebensborn System – and an independent Reich Pilots’ Guild was established formally in Mid-June RY118. At present, the Guild is run by Arndt Friedemann, a former SS-Brigadeführer.

The final lap of luxury in transport is provided by zeppelins which ply the airways around the Fatherland and the occupied territories, as well as following the Shadow paths into the Aussenhandel Shadows. While not the fastest method of transport, the magically propelled dirigibles and their cruise-liner style passenger cabins, are a popular form of transport for those who wish to be ‘seen’.

Back to the Reich Main Page