To say that the Sable Royal Family is extensive, would be something of an understatement. While King Robert and Queen Claire only have fivechildren, it appears that in the years before the King and Queen were married, and even before Sable, Robert had something of a reputation as a ladies’ man. From what little can be gleaned of his past, it would seem that he initially married very young, to a woman called Elizabeth McCauley, but that she died giving birth to his eldest child, Prince Andrew. After that, it appears that many decades passed before he again settled down and married Queen Claire.

The family has grown further, with the birth of a number of Royal grandchildren, many of them in Sable itself and therefore well known to the people of the Kingdom. Many of them have important positions within the realm, although it is very rare that they will directly interfere in the workings of the legally elected government.

Relative age within the Family seems infinitely flexible, so that in appearance, the generations are not obviously clear cut: for example King Robert and Prince Andrew are far closer in appearance to brothers than father and son. 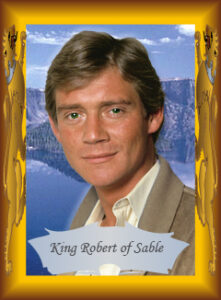 Robert de Lacy has has been the duly anointed King of Sable for as long as anyone can remember: indeed, he has ruled throughout the history of the land, a period of time significantly longer than his apparent age would suggest. This has been variously ascribed to the mystical Power which the Royal family is supposed to have access to, his known skill as a mage, and other even stranger rumours that he and his family are, in fact, immortal.It is believed that his origin, and therefore that of the Royal Family, is not from Sable and its surrounds. However no indication has been discovered from whence else they might have come, although there is a strange note in the transcripts of his Coronation, in the very dim and distant past, that he was crowned King and Creator of Sable. The reasons for this are now lost to memory.

Most of the time, his monarchy is a supervisory one: he leaves the government of his lands to his ministers, giving Royal consent to the legislation they wish to pass, and mainly concentrates on State and Royal appearances and visits, his own pursuits – such as painting, at which he is good enough to exhibit, and music, where he is an accomplished pianist and plays clarinet – and his family, to whom he seems devoted. He favours his right leg slightly when he walks.

The main occasions when he puts aside his hands-off approach to the Kingdom, and gets actively involved as ruler, are the thankfully-infrequent periods of trouble or unrest among the neighbouring Shadows, and at times of significant threat. However, even at these times, he is always careful not to act in a despotic manner. The arrangement is acceptable to his government, and goodwill exists between Crown and State, and the people and their King.

In addition, he regularly teaches forensic magic at the Sable Mage College…a duty he seems to enjoy, although when he first proposed it, the other tutors at the College were taken aback to say the least. Perhaps the fact that he is the foremost forensics mage in the Kingdom, as well as being one of the best mage-healers, especially in troubles of the mind, helped to persuade them that wishing to teach was more than a Royal affectation. 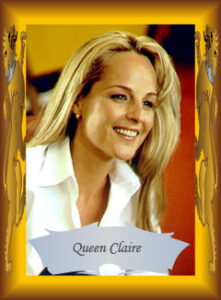 Throughout his reign, King Robert has shared the throne with his wife, Claire, and even after all this time, they still appear to be very much in love. She, too, is known to be Talented, as are their three older children together: Alison of Azure, Cathal of Argent and Princess Emily.

She is a warm, quiet, and infinitely patient person who takes pleasure in helping others. She is a mage-surgeon of considerable skill, working at Sable Royal Hospital on a semi-regular basis, in and among her other duties. However, she also manages to assert her place within the Royal Palace, managing to keep her husband’s extensive family in order.

Like King Robert, her origins are blurred, especially as it is rumoured that she has Powers unlike anyone else in the realm of Sable, with the exception of Prince Gwillym, who has been her student. It is known that she has links to the Logrus Realm of Aurellis, founded by Roland, Pater Deorum, an old friend of her husband’s, and she is the younger sister of Roland’s wife, Sian.

Robert and Claire have four children: the twins, Queen Alison and King Cathal, respectively the rulers of Azure and Argent; Princess Emily; and the youngest, Prince Cameron.

For matters of inheritance, the succession is largely patrilineal, although a daughter of someone in the succession can inherit before an uncle. In the history of Sable, there have been a couple of changes in the Order of Succession: notably, Prince Andrew’s abdication of all rights for himself, prior to his disappearance in SY069, and the departure of Prince Dominic and his family.

The current higher order of succession is:

The recent Regency Bill has brought in a provision that in the event of the incapacitation of HM King Robert, or if he is rendered in any way unable to rule, a Regency will be put in place for a period of five years, before the formal confirmation and Coronation of a new monarch. Within that timeframe, should King Robert once again be seen to be willing, able and competent to rule, then the Regency is declared ended, and His Majesty is automatically restored to the Throne with full rights and privileges.

Children of morganatic or illegitimate relationships are considered legitimate for inheritence, but not the succession, if they have walked the Pattern in the presence of the King and their Sable parent.

Prince Dominic has taken himself and his family out of the Sable succession, and moved to the Outside.

In addition, excluded from the line of succession at this time are:

The Royal Order of Precedence

The recognised Royal order of precedence within Sable is as follows:

All acknowledged great-grandchildren are considered Royal.