To expedite the war against the Reich’s enemies, the Schutzstaffel has a cross-Shadow combat arm, the Waffen-SS. This comprises fully militarised formations of the SS which supply elite combat troops. They are highly skilled in many magical and technical fields, as well as in foreign languages, and recruit from every nation and Shadow friendly to the Fatherland, as well as Reich Citizens. They have an enviable reputation for success among the various Reich forces, and are ones most feared by the Sable military. The Waffen-SS works closely with the Reichs-SS and receives much of its funding from the SS Operations Main Office. 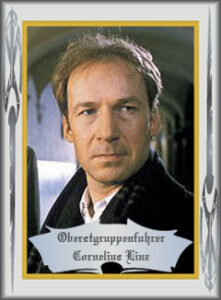 Following the tragic death of Jürgen Kessler during the attack on the Wewelsburg at the Summer Solstice, RY154, Cornelius Linz was promoted to command the Waffen-SS. Like so many of the SS hierarchy, he and his twin brother Josef are Lebensborn. He is Talented and joined the SS at eighteen, as soon as he left school, rather than bother with State Service. He did officer training at Bad Tölz and studied magic at the SS-Schule Haus. After gaining his Bachelors in magic, he spent a brief while within the SD, but eventually requested a military assignment and transferred to the Waffen-SS in RY110. In later years he returned to the Schule Haus and furthered his magical education.

He is a highly professional career officer, specialising in fast, mobile attacking tactics, both with cavalry and mechanised units, as well as being an expert at combat magic. While some insiders were wondering if there would be friction between himself and his new commander when Kessler was appointed to command the Waffen-SS, apparently over Linz’s head, they ended up developing a good working relationship. However, with Kessler’s death, Linz was the logical choice to succeed him. He was honoured as one of the Summer Circle Knights of the SS with the establishment of that group.

Einsatzgruppen normally comprise around 3,000 men. Their primary purpose is to “ensure the security of their respective operational zones”, and carry out “special tasks”, which they take to mean finding and either capturing or killing udeesirables in lands newly conquered by Reich forces. Command of the Einsatzgruppen changed in June RY154, after a terrorist incident, and the new commander is Mahael Waldemar, eldest son of the Landgraf von Danzig. At any given time there can be between five and ten Einsatzgruppen in operation, each usually commanded by a Standartenführer or a Brigadeführer who reports to Waldemar as the co-ordinating officer. Waldemar, himself is, Talented, with a speciality in combat and communications magic. His younger brother Marius is 2iC of the SS Honour Guard.

This is the branch of the SS responsible for operating and policing the detention camps sited at various locations throughout Reich territory. This division has begun working closely with the ADG. However, in April RY154, there was a change of leadership at the top of the division, with the former general commanding, Rutger Sigiswald, replaced by Wolfram Kapler (younger brother of the Reichsprotektor of Sanguine), who was promoted from his previous position as Kommandant of the Wewelsburg.