As far as Sable has ascertained, the Creation of New Oceania in SY103 did not go according to plan, and matters were further complicated in SY120 when Andrew de Lacy built the Technocracy. 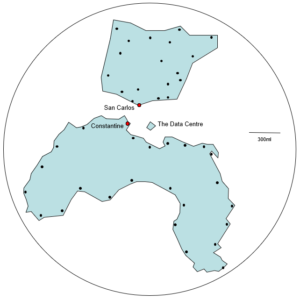 New Oceania was formed when the Brotherhood of the Martyr, led by Diego de Real, together with his co-Triumvirs on Manira, Francis Edwards and Gregor Konstantin devised a scheme to move Broken Pattern Dark Three from Veil 9 to an alternative location. Sadly, all three Triumvirs died in the process.

Geographically, the world has similarities to the original Manira, although the two continents are further apart and the former Martyr’s Island – now called the Data Centre – is rather larger than it used to be.

There is the usual climatic variation across a world of this size, although for New Oceania, this is made worse by the amount of dust which was thrown into the atmosphere in the cataclysm that original heralded the relocation of the old BPD3 from Manira to New Oceania. Over the last 50-odd years, this has improved, but the climate is still five degrees Celsius lower than their Earth geographical equivalents. This has had knock-on effects for agriculture and the production of food.

What agriculture there is on New Oceania is organised through collective farming, under centralised control.

Magic is nothing like as strong as the Founders would have liked, but given the problems with transfer, they were unable to control and guide its formation. This has not changed in the years since it was founded. As a result, there is more of a reliance on technology, rather than magic: a reliance which has become more apparent since the Data Centre was founded on the former Martyr’s Island in SY120.

The Talent is not that common among the people who are the children of the orginal Oceania Design (the relocated BPD3). Moreover, much of the Talent was concentrated among the members of the Brotherhood of the Martyr, who relocated here from Manira to found New Oceania in SY105. Since Andreas Delatz came to power in SY120, the Brotherhood has been eased out of the equation with respect to the influence it used to wield. On the other hand, Talented members of the former Brotherhood and their children (some of which are the result of interbreeding with the non-Talented population of the world) are considered a valuable resource for the future.

Originally, the level of technology was equivalent to the late-1890s/steampunk, and what tech there was had a magi-tech element. Since SY120, when the Data Centre supeseded the Oceania Design, the tech level has risen noticeably. During that time, the “magi” part of “magi-tech” has become necessarily less important, given the lack of mages.

The base tech level is now much closer to the early-2000s. Mass communications have not developed in the same way, however, as these are strictly controlled by the Ministries. As well as personal transportation (for the top few), there is an efficient mass transit system comprising buses and trains, with with major underground networks in Constantine and San Carlos. For more senior members of the population, transport around New Oceania is by car, air car, personal flyer or mass transit in specially reserved carriages or buses. There is also a limited airline network. 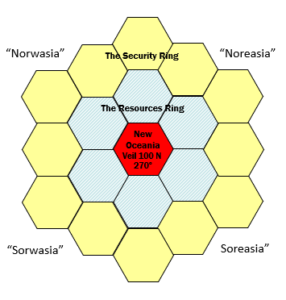 Shortly after BPD3 was relocated to Veil 50 (as it was then), a cordon of security and resources Shadows was set up around New Oceania, with “hard-coded” Shadow pathways to allow the people of the world to access those Shadows.

The first ring of worlds were lightly populated, and thsu were established as an agricultural and minerals/mining resource base to try to compensate for the climatic upheavel that the relocation of BPD3 cause, and allowed New Oceania to be largely self-supporting.

The second ring acts as a security cordon. It was originally patrolled by human forces, and offered an early-warning system of enemy attacks. Since the establishment of the Data Centre, the human patrols have been withdrawn, and are now undertaken by a combination of mechanical drones and electronic surveillance. Additionally, as there is no longer a human population on these worlds, these worlds are now being aggressively mined for further resources.

As a world built on the mentality of New Oceania usually needs a war to keep the people compliant, the government has defined four “enemy powers”, located around the Security Ring. These are Noreasia, Norwasia, Sorwasia and Soreasia.