For more than eighty years, it was a hotbed of conflict between Sable and the Reich, because it hosted one of the Sable Broken Patterns, code-named Dark Three. Unlike the other two DBPs, where the worlds originally aligned with the views of the Reich, BPD3 demonstrated something of a corrupting influence on its people. This was evidenced by the fact that the successive leaders of invading forces from both sides eventually turned their loyalties away from their original masters – be they Sable or the Reich – in favour of setting up their own kingdoms on Manira. In the end, it was Sable that withdrew from the fight for Manira first, deciding that “just because it’s there” was no longer a good enough reason to expend further lives and resources trying to take and hold it.

The Triumvirate, Rulers of Manira

Between its first discovery by Sable in SY003, and the Kingdom’s decision to abandon all attempts to fight the Reich for control there in RY079, both realms lost senior personnel to the corrupting influence of the place, whie two of the later Triumvirs gained their positions by this means.

By the time the Brotherhood of the Royal Martyr was founded by Diego de Real in SY085 there were two major leaders on Manira – Francis Edwards (formerly of Sable) and Gregor Konstantin (formerly of the Reich).  Rather than fight the rise of the Brotherhood, Edwards and Konstantin came to an agreement with de Real the same year, to form a Triumvirate to share rulership of Manira, and to work together to resist any further incursions from Sable and the Reich, develop the Brotherhood, and become a major force in their own right in that area of Shadow.

As it turned out, only the Reich made any further attempt to take over the world. Sable declared the world off limits, which gave the Triumvirate the perfect opportunity to start bringing their plans to fruition. It is not clear whether New Oceania was the culmination of the plans laid back then, or if they came along later.

The Brotherhood of the Royal Martyr

The Brotherhood was founded in SY 085 by the Most Blessed Prophet Diego Gonzalo de Real. The core belief was that their ‘god’, Good Prince Chartris, was betrayed and martyred by Sable for speaking against his wicked father Andrew, and the evil King. As such, Sable was the enemy, and should be resisted in the memory of the Blessed Martyr.

Its acolytes were split into two branches:

To the chosen acolytes of both branches, the Most Blessed Prophet gave limited reality and power, by virtue of infusing them with the power of BPD3, which allowed them to find Royal Ways and travel Shadow to a limited degree, as well as defend themselves against magical attack. Some were also blessed with the knowledge of Channelling magic, a form of magic that did not seem to occur in the other Broken Pattern realms (and not longer exists on Manira).

Behind the High Priest, the second most powerful member of the Brotherhood was Sister Louhira, principal of the Doctrinal College, the body which decided on the forms of ceremonies, as well as training the Siblings Spiritual, and coming up with ideas and beliefs which could be used to reinforce the justification of the Brotherhood’s actions (cf the Reich Ahnenerbe). When she later reappered on New Oceania, it became clear that she is was actually Diego’s daughter.

The Brotherhood found a way to harness the influence of BPD3for their own use, and to instil in its initiates a far more powerful kind of initiation than that encountered with the other eight instances. Instead of just being able to use it to travel Shadow, the Brotherhood found a way to incorporate it into their magic – both ritual and normal sorcery – such that its initiates could use its power to back their spells in a way otherwise only seen with the full Royal Power. 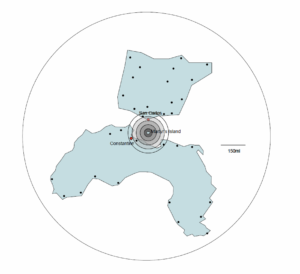 The Reich’s final attempt to gain control of Manira started in RY100, and was initially under the joint command of Joachim Peiper and Rupert Delatz. Unfortunately, the Reich’s normal Blitzkrieg tactics were unsuccessful due to resistance led by the Triumvirate, backed by the power of BPD3, which included some ability to Channel the energy of the Sign elsewhere. Ultimately,  Reich ambitions were scaled back to just the northern landmass, with Martyr’s Island the ultimate objective. Even so, the conflict dragged on until June RY105. Peiper and Delatz weren’t present the entire time, as the period in question coincided with the Reich expansion in the Outer Ring worlds (Veils Four to Six). However, Peiper retook command in early RY105, for a last push. This ended up being generally successful, and by June of that year, the Reich controlled the northern landmass and thought that the Brotherhood there had been obliterated. The Reich was about to launch a major assault on Martyr’s Island, when the Brotherhood struck back. A ritual was successfully enacted on BPD3 to remove it to another location, but the energy released all but destroyed Martyr’s Island, and caused significant damage to both the other landmasses.

The world of Manira originally had two major continents, with the small piece of land known as Martyr’s Island in the sea between the two. The circular target area marked on the map to the left represents the area of the worst devastation when the energy from the Maniran Broken Pattern was uprooted to form New Oceania in SY105. 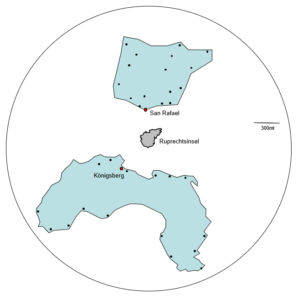 Following the departure of BPD3, the wounded world of Manira generated a great deal of instability among the Shadows around it, and began generating Shadow Storms. This prompted King Robert of Sable and RFSS Delatz of the Reich to undertake a repair and reconstruction of the Maniran Power and the world itself.

During the course of this reconstruction, Martyr’s Island increased significantly in size and the continents moved further apart (much like New Oceania itself). This landmass was later renamed Ruprechtsinsel and Manira is now under the control of the Reich.