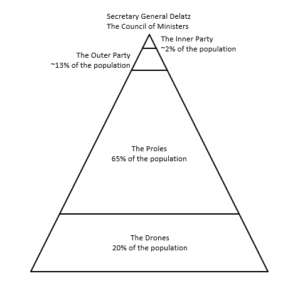 New Oceania is a police state, with overall control in the hands of the New Oceania Worker’s Party (usually just known as the Party). There is a three-tier class system in place: the Inner Party, the Outer Party and the Proles. Every member of the population is expected to carry ID at all times. For Party members, these have a biometric element (akin to the Aurellian ID system), although for the Proles, the ID is more traditional. All ID are issued by the Ministry of Love. Before it was disbanded, the Brotherhood was counted within the higher echelons of the Party.

There is nominally sex equality in its government and Party organisation, but in practise there are very few powerful women and there is an ingrained male bias in society. Among the Proles, the bias is more obvious, with male employment at a higher level than female, as women are more expect to stay at home and look after the family.

New Oceania runs under a centralised economic model. There is a duel currency system. The Party economy is based around credit chips linked directly to the bank accounts of the owner of the chip, which are held at the Bank of New Oceania. All wages and bonuses are paid directly into these bank accounts. Party members are not supposed to ever handle money. In contrast, the Prole economy works on a physical currency called the New Dollar, although some Proles, especially those in more senior positions, do have bank accounts.

The Prole economy is largely based around a thriving black market, which Party members occasionally take advantage of.

Architecturally, in the Party areas, there is a blend of traditional impressive stone, skyscrapers and very modern glass, with wide boulevards and imposing facades. The Prole areas are more in the way of concrete and brick tenements and wood/metal shanty towns, with twisted, narrow roads between them. It’s a brave Party member who goes into the depths of the Prole residential areas. Usually, in a New Oceanian city, the city centre will be the Party area, and the suburbs will be the prole areas.

The main forms of transportation are personal transportation for the top Party types, and the efficient mass transit system comprising buses and trains, with with major underground networks in Constantine and San Carlos. For Party members, transport around New Oceania is by car, air car, personal flyer or mass transit in specially reserved carriages or buses. There is also a limited airline network. Air cars/buses/planes transport the Party faithful from city to city, or city to country, so they don’t have to see the nasty bits in between. Party members have more freedom of movement than the Proles.

The Proles are more reliant on mass transit, and personal vehicles are very rare. The Proles are usually limited to the city of their residence and an area of about twenty miles around, and all transport beyond that requires travel papers.

Party families have the best opportunities, although even within this, individual status in the Party can provide better opportunities. Schooling is provided for the children, as are jobs for the adults. Unemployment is discouraged. Most members of the Party work in the Ministries, or administer Ministry projects, and effectively have the majority of the white collar jobs. Decent healthcare is provided, as the Party aims to look after its members from cradle to grave…although the number who reach the “grave” stage is somewhat variable. Only children of Party members are entitled to join the Ocenania Children’s League or the Oceania Youth League. All members of the Party are expected to attend regular Hate Workshops, which let everyone get out their frustrations with their lot in a controlled manner. The hate figure, Andrés Lascius, is leader of the Monarchists – a secret society with the aim of undermining New Oceania society.

In contrast, the Proles do most of the blue collar and industrial work, plus manning the collective farms. There isn’t a formal schooling system for their children, beyond the basics of reading and writing, and this is mainly so that they can be fed a solid diet of entertainment – mainly game shows, reality TV and soap operas – as decreed by Minitrue. They do have basic healthcare.

There are telescreens in every room, broadcasting two streams of central programming: one for the Party and one for the Proles. These can apparently be used as two-way monitoring devices.

Working clothing is usually overalls/coveralls, as they are simple and convenient, or robes for the Brotherhood. The colour of these varies, depending on whether the individual is a Party official, a Ministry employee (and if so, which one), a member of the Brotherhood or a Prole.

Out of working hours, there is more freedom for people to wear what they wants, but clothing is usually pretty plain and straightforward, with most people only having one or two good outfits for Party celebrations.

Even the Proles are not the very bottom of the heap. That “honour” belongs to the Drones, a robotic force which deals with the very worse tasks, such as working in sanitation, clearing the sewers, pest control, working in the abbatoirs, etc. The Drones only came to the fore in such positions after the establishement of the Data Centre. In addition, to address the problem of getting goods and merchandise from one city to another, without allowing the Proles transport privileges, Drone-operated vehicles serve this important purpose. While they don’t need them, per se, Drones are usually dressed in light grey boiler overalls, to make them appear less…odd.

It has been noted that as the percentage of Drones in the population increases, pressures on the food supply decrease.

Back to the Main New Oceania Page