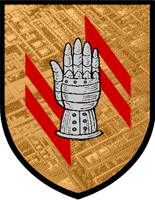 Ex Machina is the code-name for what the Outside base of the Machine, as identified by the Datastream Network, based on Seconde, location of the External Nexus. From encounters with Machine operatives Outside since the Lighthouse Paradox struck the Inside, backed up by data from Seconde, it appears that Ex Machina is a lot closer to the original equatorial world of Prime (not to be confused with Technocracy Prime, which is now located in Veil 100 N on the Inside). At this time, however, the exact location of Ex Machina has not been established.

Additionally, as a reflection of the work that the Aurellian God of Communications did to keep the Technocracy’s Prime and Seconde bases in contact with each other, from what has been gleaned thus far, it appears that this has been reflected in decent data communications between the Data Centre and Ex Machina.

The Machine, as based out of Ex Machina, is a predominantly mechanical civilisation that has no regard for any form of life and seeks its destruction. If, as seems likely from what information has been discovered, Ex Machina is closer to the original Inside equatorial world of Prime, very little truly lives on Ex Machina. The majority of inhabitants are either robotic or cybernetic, with the odd exception, in the form of the External Controller, and the Council that reports to him.

Machine drones follow orders from the Controlling Consciousness (in the form of the Eeternal Controller, and above him the Master of the Darkstream), and they make no pretension to be human in any way. Indeed, the Consciousness considers humanity to be weak, and as something which should, for the most part, be eradicated. A typical Machine attack would involve destruction of all life by Machine foot soldiers, followed up by other Machine entities stripping the conquered world for resources to feed the Machine’s Military-Industrial Complex.

From information discovered by the Seconde Datastream Network, Ex Machina appears to be commanded by External Controller Marcus Mountjoy, a human who was recruited by the Master of the Darkstream when he was looking for someone of the appropriate mindset to become his eyes and ears on the Outside. His point of origin is unknown, but he was one of the earliest initiates of the Darkstream, located on New Oceania in Veil 100 N on the Inside, and appears to have embraced the attitudes of the Machine. It is not known for certain if there is an Iteration of the Darkstream Power on Ex Machina, but Machine Drones on the Outside certainly get their orders and are powered from somewhere.

Other iterations of Controller Mountjoy, or individuals very like him in appearance, have been found on a number of Earth-type worlds, such as St. James.

The Council of Controllers

Given that there is a lot more Shadow on the Outside than the Inside, External Controller Mountjoy apparently runs operations with the assistance of the seven-strong Council of Controllers. These are  individuals (or maybe not) who the Master and Controller Mountjoy were willing to trust enough to use as deputies. They have less Machine intrusion in their actions, and higher privileges, levels of access and freedom than other Controllers, allowing them a measure of free will and the ability to improvise if things aren’t going entirely their way. According to information discovered by the Datastream Network, these, in turn, have lesser Controllers reporting to them, some of whom are also still largely human..

When a world is being conquered, one of the Council is usually sent to lead the conquest (if Controller Mountjoy doesn’t do it himself), so they have the opportunity to override the Drones’ existing programming if it is deemed necessary to react to circumstances. All Controllers are also Darkstream initiates and it is believed that there is only one of each, although this is never guaranteed with the Machine.

Given that humans now have the opportunity to walk the Darkstream, there are far fewer manufactured organic/living Machine operatives, and far more mechanical Drones. These exist to destroy non-Machine life and take the resources wasted by breathers to further their own culture and ends. They follow orders from the Controlling Consciousness.

Drones are manufactured in a number of different patterns, including:

These can be programmed to serve in different capacities, depending on the stage of the conquest of a world, including:

In addition, for worlds where a degree of infiltration and subtlety are required, Darkstream initiates and cloned humanoids (and other sentients) have sometimes been encountered.

For more details about the Drones, please click here.